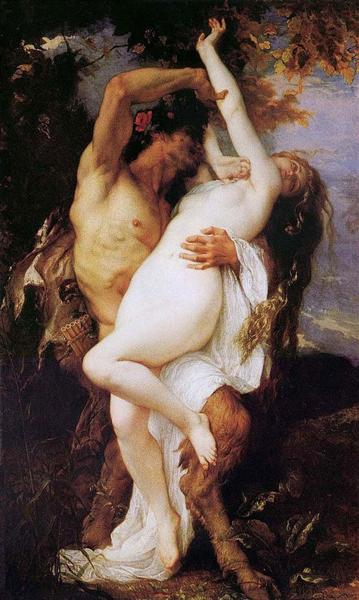 Academic art, or Academicism, is a style of painting and sculpture produced under the influence of European academies of art. Specifically, academic art is the art and artists influenced by the standards of the French Académie des Beaux-Arts, which practiced under the movements of Neoclassicism and Romanticism, and the art that followed these two movements in the attempt to synthesize both of their styles, and which is best reflected by the paintings of William-Adolphe Bouguereau, Thomas Couture, and Hans Makart. In this context it is often called "academism", "academicism", "L'art pompier", and "eclecticism", and sometimes linked with "historicism" and "syncretism".

The first academy of art was founded in Florence in Italy by Cosimo I de' Medici, on 13 January 1563, under the influence of the architect Giorgio Vasari who called it the Accademia e Compagnia delle Arti del Disegno (Academy and Company for the Arts of Drawing) as it was divided in two different operative branches. While the Company was a kind of corporation which every working artist in Tuscany could join, the Academy comprised only the most eminent artistic personalities of Cosimo’s court, and had the task of supervising the whole artistic production of the medicean state. In this medicean institution students learned the "arti del disegno" (a term coined by Vasari) and heard lectures on anatomy and geometry. Another academy, the Accademia di San Luca (named after the patron saint of painters, St. Luke), was founded about a decade later in Rome. The Accademia di San Luca served an educational function and was more concerned with art theory than the Florentine one. In 1582 Annibale Carracci opened his very influential Academy of Desiderosi in Bologna without official support; in some ways this was more like a traditional artist's workshop, but that he felt the need to label it as an "academy" demonstrates the attraction of the idea at the time.

After the Académie royale de peinture et de sculpture was reorganized in 1661 by Louis XIV whose aim was to control all the artistic activity in France, a controversy occurred among the members that dominated artistic attitudes for the rest of the century. This "battle of styles" was a conflict over whether Peter Paul Rubens or Nicolas Poussin was a suitable model to follow. Followers of Poussin, called "poussinistes", argued that line (disegno) should dominate art, because of its appeal to the intellect, while followers of Rubens, called "rubenistes", argued that color (colore) should dominate art, because of its appeal to emotion.