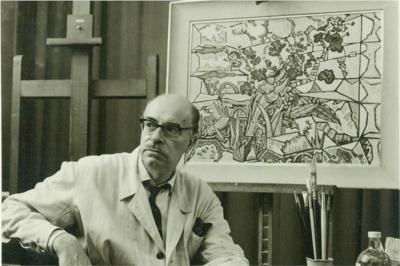 He studied ancient and Byzantine art as well as folk art due to his adoration for the Greek landscape. During his youth he was exposed in Paris to the avant-garde European artistic trends and he gained recognition as the leading Greek cubist artist.

His aim was to focus on the harmony and purity of Greek art and to deconstruct the Greek landscape and intense natural light into simple geometric shapes and interlocking planes.

His works are featured in the National Gallery (Athens), the Musée d'Art Moderne de la Ville de Paris, the Tate Gallery in London, the Metropolitan Museum of New York and in private collections worldwide.

Hadjikyriakos-Ghikas was born in Athens in 1906. His father was the admiral Alexandros Hadjikyriakos, and his mother Eleni belonged to an old navy family of Greece. His father During his teen years (1918–1922) his family recognised the potential of his talent and arranged for him to study painting with the artist Parthenis. In 1923 he went to Paris to study French Literature and Aesthetics at the Sorbonne University. During his first months in Paris he participated in an exhibition that took place in the Salon des Indépendants. In 1924 he continued his studies in painting and engraving at the Academie Ranson. In 1927 he had his first exhibition at Gallerie Percier. Picasso himself noticed and commented the works of the young Greek artist.

In 1933 he organised in Athens the 4th International Architectural Symposium. In 1934 he arranged another exhibition of his paintings and sculptures in the Gallerie des Cahiers d' Art and in the international exhibitions of Paris and Venice. From 1935 to 1937 he was co-editor of the art magazine 3rd Eye. In 1941 he was offered a position in the Architectural School of the National Technical University of Athens. In 1949 he formed, with other artists including Yiannis Moralis, Yannis Tsarouchis, Nikos Nikolaou, Nikos Engonopoulos and Panayiotis Tetsis, the "Armos" art group. In 1950 he was the Greek participant at the Venice Biennale where he exhibited 17 of his paintings.

In 1961 he married Barbara Hutchinson, who had previously been married to Victor Rothschild, 3rd Baron Rothschild and to classicist Rex Warner.

Today in Greece he is celebrated as one of the most important modern Greek painters. His house has been converted to a museum and is being run by the Benaki Museum. In 2018, the British Museum hosted an exhibition which focuses on the friendship of Ghika, the artist John Craxton, and the writer Patrick Leigh Fermor; their shared love of Greece was fundamental to their work.