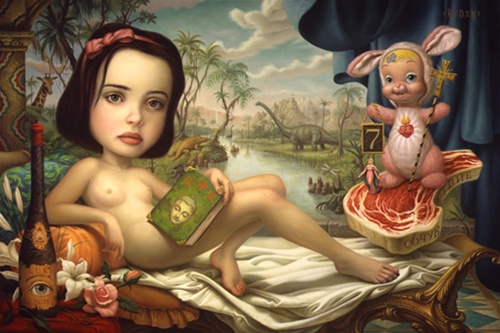 The painting Snow White (1997) by Mark Ryden is an early example of his complex use of iconography, a key characteristic of his art. The painting was featured in Ryden’s 2004 exhibition titled “Wondertoonel”. The exhibition title was borrowed from the 1706 book Wondertoonel der Nature, that showcased the ‘cabinet of curiosities’ of Dutch merchant Levin Vincent. For Ryden, his personal cabinet of curiosities is represented in his art through the odd and unique objects that populate his paintings. The artist seeks out inspiration from different sources: museums, popular culture and his own collection of objects. Ryden’s studio is filled with various objects he collected at flea markets, old books, photographs, toys and religious statues. In particular, the artist is drawn to memories and objects that relate to his childhood, which can explain his choice of subject for Snow White. In the painting, Snow White is in a surreal environment that weaves together different symbols, creating a kind of personal cabinet of curiosities.

Ryden’s Snow White resembles the Snow White from the Disney animated movie, Snow White and the Seven Dwarfs produced in 1937. Based on the 19th century fairy tale by the Brothers Grimm, it was the first full-length animated movie and it remains one of the most influential children movies ever made. Ryden plays with Snow White’s image in popular culture: Snow White ‘the fairest of them all… with hair as black as ebony, skin as white as snow, and lips as red as a rose’ is a symbol of purity, beauty and goodness. Ryden subverts this image by presenting Snow White in the nude reclining on a couch. Several symbols ironically allude to Snow White’s purity, the rose and lily and even a small statuette of the Blessed Virgin Mary. Curator Debra J. Byrne suggests that the bottle of wine next to Snow White references the biblical Luke 22:13: the chapter deals with Judas betraying Jesus for gold. This could be interpreted as a critique of the commercialized image of Snow White.

The pose and composition reference the two masterpieces by 19th century painter Édouard Manet, Olympia (1863) and The Luncheon on the Grass (1863). Both paintings by Manet caused an uproar when they were first shown in Paris. The paintings were labeled ‘vulgar’ and ‘immoral’ for their sexual overtones and suggestions of indecent behavior. In Snow White, Ryden added a slab of meat and primordial landscape making carnal and sensual qualities of his Snow White more explicit. Meat is a recurring theme in Ryden’s art, and for the artist ‘the consumption of animal flesh is a natural primal instinct, just like sex and making paintings’. Perhaps this is a critique of the media sexualizing young girls and our collective consumption of such content. Snow White covers her genitalia with a book with the image of the Buddha. This addition of religious symbols once again brings into question the meaning of Snow White - is this image holy or blasphemous? Ryden leaves this open to interpretation, hinting at multiple possibilities with a wide range of symbols from a variety of sources: religious iconography, art history and popular culture.