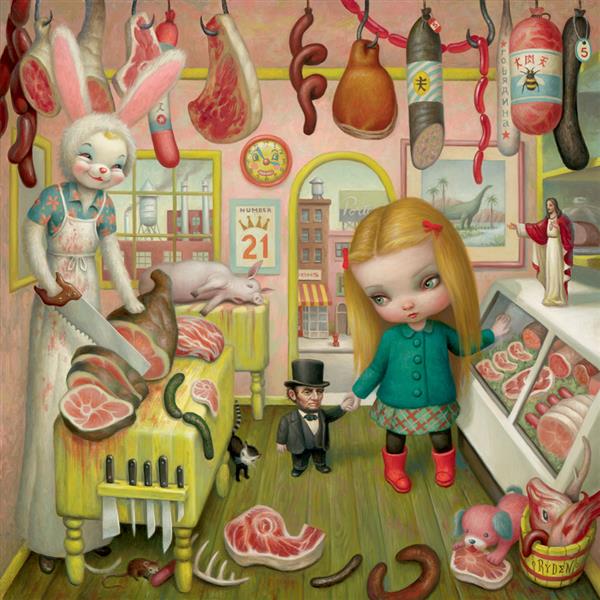 As the title indicates, the painting The Butcher Bunny (2000) by Pop Surrealist painter Mark Ryden principally deals with the subject of meat. For Ryden, meat is an important and recurring theme, and his fascination with the subject can be traced to his 1998 solo debut show entitled The Meat Show. In one of his statements, Ryden explained the appeal of the subject: “Meat is glorious to paint. It is so easy to transcend the representational to the abstract.” Indeed, because of its strong visual impact, meat is a popular subject in art history, painted by masters like Rembrandt and Van Gogh.

In The Butcher Bunny, the artist depicts a surreal scene: a young girl in a butcher shop holding hands with Abraham Lincoln, while the butcher, a tall bunny, cuts up a large ham. The painting is rich in strange details: small animals on the floor are nibbling on meat, sausages with strange labels hang from the ceiling, and on top of the counter, a statue of Jesus that welcomes the customers. Ryden often connects the theme of meat to religious traditions, and in The Butcher Bunny the artist alludes to the Christian ritual of the Eucharist. The Eucharist, also known as the Holy Communion, is a celebration of Christ’s sacrifice on the cross: Christians drink sacramental wine that symbolizes the blood of Christ and eat sacramental bread that symbolizes Christ’s flesh. Ryden interprets the Eucharist in a literal way - a butcher shop where Jesus seems to offer his flesh, a visual that is both humorous and unsettling. This interpretation is not unique to The Butcher Bunny, in fact the artist firmly established this association in earlier paintings. For instance, in A Dog Named Jesus (1997) a little girl places a large slab of meat in a dog’s dish labeled ‘Jesus’. Appropriately, the dog wears a crown and the dog house is decorated like a church.

Another important element in the painting is the bunny, who is a recognizable character in Ryden’s artistic world. Featured in paintings like Inside Sue (1997) and Jessica’s Hope (2001), the bunny seems to be a natural companion to the innocent big eyed girls that populate Ryden’s paintings. In The Butcher Bunny, the figure of the bunny combines elements of sweetness and gore: its face resembles a cute stuffed animal, but at the same time the frozen expression has a sinister quality. In addition, the bunny also wears a long apron sprayed with blood, reminding the viewer of the butcher’s gory and messy profession. In The Butcher Bunny, Ryden creates an overall impression that is sickeningly sweet. This tension is at the core of Ryden’s imagery, the combination of motifs is disturbing and unsettling, but Ryden softens this by injecting elements of humor and irony. The soft, lively colors and the cartoonish style in The Butcher Bunny create a joyful, carnivalesque atmosphere to an image that could easily belong in a nightmare or a horror film.