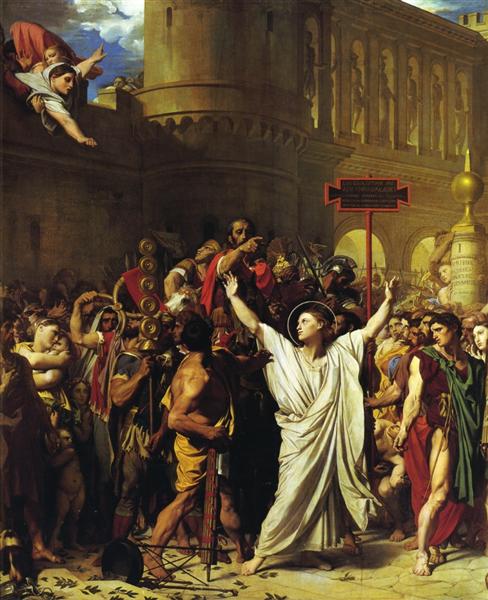 The Martyrdom of St. Symphorian

The Martyrdom of Saint Symphorian is an 1834 painting by Jean-Auguste-Dominique Ingres. It shows the death of Saint Symphorian, the first Christian martyr in Gaul. Painted in oil on canvas and measuring 407 x 339 cm, it is now in Autun Cathedral.

Frustrated during the early part of his career by the need to paint portraits to earn a living, Ingres was determined to make his reputation in the more prestigious genre of history painting, which he considered to be his true calling. His ambition was fulfilled when his The Vow of Louis XIII achieved a triumphant success at the Salon of 1824. The painting's calm classicism—which testified to Ingres' close study of Raphael and other old masters—presented a challenge to the rising popularity of the romantic style exemplified by Eugène Delacroix. The critics came to regard Ingres as the standard-bearer of classicism against the romantic school—a role he relished. Honors came his way; in January 1825 he was awarded the Cross of the Légion d'honneur by Charles X, and in June 1825 he was elected to the Institute.

During the period from 1824 to 1834 he painted few portraits, and concentrated on history painting. He received several important commissions for such works, such as the monumental The Apotheosis of Homer, commissioned in 1826.

The Martyrdom of Saint Symphorian was commissioned in December 1824 by the bishop of Autun, Monsignor de Vichy. It was intended to replace an altarpiece by Fra Bartolomeo (The Marriage of Saint Catherine; 1511) that had been confiscated to Paris during the Revolution. The subject of Ingres' painting was a youth who was beheaded ca. 160–179 by for refusing to worship a pagan idol. Monsignor de Vichy gave Ingres a detailed program to follow in composing his picture, which Ingres followed closely. The painting depicts the Roman proconsul Heraclius and his guards seizing Saint Symphorian and ordering him to prostrate himself in the temple of the pagan goddess Cybele, or be killed. The saint's mother, overlooking the scene from the city wall above, urges him to have faith and face death gladly. He gives her a heartening look.

Ingres began work on the project with the hope of finishing the painting in time to exhibit it in the Salon of 1827, but the work proceeded slowly. He prepared the composition in all its details with his usual care, ultimately producing more than 200 preparatory drawings and at least eleven studies in oils. He had not yet resolved the composition by the time of the July Revolution of 1830. Unsettled by the revolution, Ingres abandoned work on the project for a time, but by 1833 had returned to it with renewed vigor. The art historian Susan L. Siegfried contrasts the figure studies datable before 1830 with those made after the July Revolution, such as the two oil studies in the Fogg Art Museum (1833), in which "Ingres incorporated all of the passion of his own reaction to the social upheaval" and gave emphasis to "the energy of the mob, painting a moral lesson for the public he abhorred".