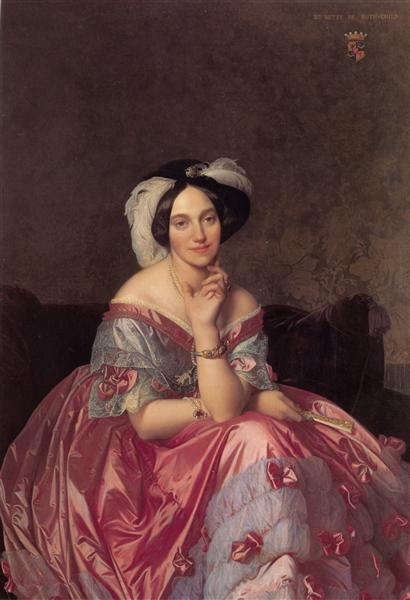 Baronne de Rothschild is an 1848 portrait by the French Neoclassical artist Jean-Auguste-Dominique Ingres. The sitter, Betty de Rothschild (1805–1886) had married banker James Mayer de Rothschild and was one of the wealthiest women in Europe, and one of the foremost Parisian patrons of the arts. Her beauty and elegance were widely known and celebrated, and inspired Heinrich Heine's poem The Angel. For her portrait, which is painted in oil on canvas, Ingres sought to infuse symbols of her material wealth with the dignity, grace and beauty of Renaissance art, especially that of Raphael, while at the same time adhering to the command of line as practiced by Jan van Eyck. It is this combination which, according to art historians, places Ingres so far apart from his early modernist contemporaries.

Betty de Rothschild's portrait is regarded as one of Ingres' most accomplished works, and has been described as "perhaps the most sumptuous yet approachable image of mid-nineteenth-century opulence."

She first asked Ingres to paint her in 1841 when he was much sought after as a reluctant portraitist. His ambition lay in history painting which he believed was a higher form of art, while his living lay in commissions for the nobility. At this point he was financially comfortable and refused. After meeting her at a ball and finding her highly charming, he agreed to the commission. In a letter of 26 June 1842 to his friend Jean-Pierre-François Gilibert, Ingres wrote: "Tuesday, I have a definite sitting with Mme. de Rothschild, which came at the price of a dozen puerile and sincere letters. Long live portraits! may God damn them…!"

The painting was not completed for another six years: there were false starts, and progress was interrupted while he took time to work on other portraits – including his portrait of the late Ferdinand Philippe Henri the Duc d'Orleans who was killed in a carriage accident in 1842. Although Ingres had nearly finished Mme de Rothschild's head by February 1843, in June 1844 he made a new start. As the first version of the portrait is not known to survive, it is probable that Ingres scraped it down and painted the new version on top of it. In June 1847 he wrote: "I have barely finished Mme. de Rothschild, begun again better, and the portrait of Mme Moitessier." The painting was completed in 1848.

Rothschild wears a pink satin evening dress with rows of rutching at the hem and lace frills at the collar and sleeves, trimmed with ribbon bows. Her hair is smoothed over her ears and she wears a black velvet toque decorated with ostrich plumes. She is seated on a red velvet sofa, with her arms and legs crossed in a relaxed manner. Ingres has captured her in this painting as if she were attending a soirée with friends.

She is positioned unusually low in the pictorial plane, giving her a vulnerability at odds with the obvious stature offered by the heraldic inscription and coat of arms at the top right. The portrait is dominated two main elements: her wine-red satin robe and the charm of her facial expression and perfectly oval, almost idealised, face. While she looks out at the viewer with almost the same directness as Ingres' 1832 Portrait of Monsieur Bertin, the image is softened by the attractiveness of both her pose and dress. This warmth is contrasted by the sober and dull brown upper background, which serves to off-set the splendor of the sitter.