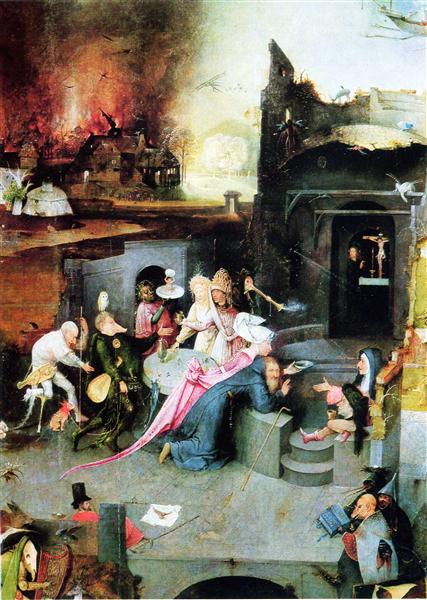 This triptych series detail the supernatural temptation of Saint Anthony during his stay in Egypt, a theme which has also been treated by many other artists, including Martin Schongauer, Mathias Gruenewald, Salvador Dali, and Gustave Flaubert. The symbolism in the paintings symbolizes the story, which depicts Anthony refraining from many different types of sin throughout the series. The fantastical images are typical of Bosch’s nightmarish style, complete with imps, monsters, and dysmorphic creatures. This triptych is often considered to be one of Bosch’s greatest work, and at least three copies have been reproduced, all of which are imitations of the original; one of which was thought to be the actual original.

The Triptych of Temptation of St. Anthony is an oil painting on wood panels by the Early Netherlandish painter Hieronymus Bosch, dating from around 1501. The work tells the story of the mental and spiritual torments endured by Saint Anthony the Great (Anthony Abbot), one of the most prominent of the Desert Fathers of Egypt in the late 3rd and early 4th centuries. The Temptation of St. Anthony was a popular subject in Medieval and Renaissance art. In common with many of Bosch's works, the triptych contains much fantastic imagery. The painting hangs in the Museu Nacional de Arte Antiga in Lisbon.


According to some historians, the work could be one of the three Temptations recorded in the inventory of Philip II of Spain sent to the Escorial in 1574. However, it is now considered more likely that the triptych was that bought by the Portuguese humanist Damião de Góis between 1523 and 1545. In fact, the painting was documented as part of the collections in the Royal Palace of Lisbon in the mid-19th century, and in 1911 King Manuel II donated it to its current museum.


Although the painting has usually been attributed to the period 1490–1500, dendochronologic analysis has assigned it to around 1501.


Like many of Bosch's paintings, The Temptation of St. Anthony was the subject of a number of copies. Another version of the central panel is found in MASP in São Paulo, Brazil, while a copy by a follower of Bosch can be found in the National Gallery of Canada in Ottawa, and another version in the Prado Museum in Madrid. A third copy (once believed to be the original but now identified by Larry Silver, an art historian at the University of Pennsylvania, as a 16th-century copy) is owned by the Barnes Foundation, near Philadelphia, USA.


The Temptation of St. Anthony is an oil painting on three wooden panels, having the form of a triptych, the two outer panels being hinged shutters to the central section. The centre panel measures 131.5 by 119 cm, and the wings measure 131.5 by 53 cm.


The work tells symbolically the story of the mental and spiritual torments endured by St. Anthony Abbott throughout his life. The sources for the subjects were Athanasius of Alexandria's Life of St. Anthony, which had been popularized in Flanders by Pieter van Os, and Jacopo da Varazze's Golden Legend.


The left panel portrays the legendary flight and the fall of St. Anthony. In the sky, the saint is brought down by a host of demons. Below, is the saint's grotto (or a brothel), carved within a hill in the shape of a man on all fours, whose backside forms the entrance. An impious procession is directed towards the latter, led by a demon wearing holy vestments and by a deer. In the foreground is a tired-out Anthony, supported after the fall by a monk and a layman; the latter has been traditionally identified as Bosch himself.


Under the bridge which crosses an icy lake are three figures, one of which is a monk reading a letter. Also on the lake is a demon bird with skates: its beak holds a cartouche with the word "fat". This could be a reference to the simony scandal.