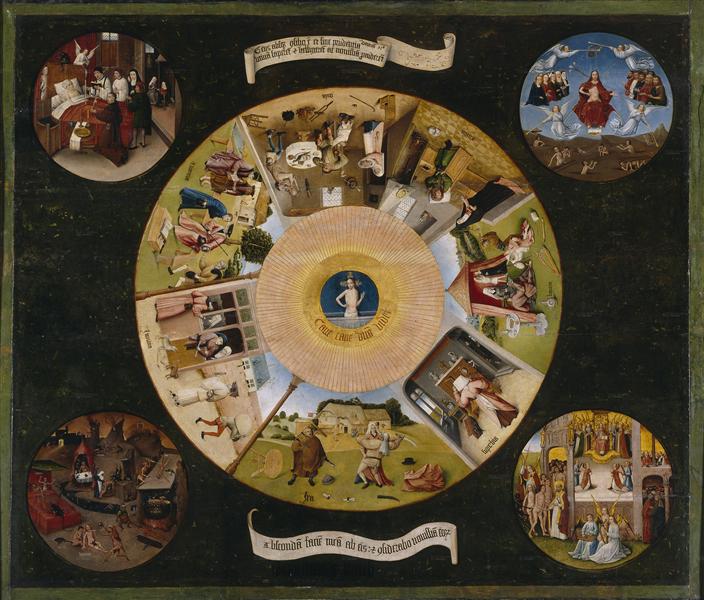 The Seven Deadly Sins and the Four Last Things (tabletop)

Unlike many of his works, in which Bosch used intricate levels of symbolism to represent his meaning, The Seven Deadly Sins and the Four Last Things literally represents the levels of sin, the punishments, and the eye of God watching over everything. Interestingly, even at his most literal, Bosch is still able to include a vast amount of symbolism into his descriptions of each of the seven deadly sins. Those sent to hell for the sin of greed are boiled in pots of gold, and in the sin of pride a demon holds a mirror up to a prideful woman. The series of paintings is much more than a description of each sin and its punishment, as a whole it represents a warning to those who would engage in sin, and acts as a deterrent to evil doing.

The Seven Deadly Sins and the Four Last Things is a painting attributed to Hieronymus Bosch or to a follower of his, completed around 1500 or later. Since 1898 its authenticity has been questioned several times. In 2015 the Bosch Research Conservation Project claimed it to be by a follower, but scholars at the Prado, where the painting hangs, dismissed this argument. The painting is oil on wooden panels and is presented in a series of circular images.

Four small circles, detailing the four last things — Death, Judgment, Heaven, and Hell — surround a larger circle in which the seven deadly sins are depicted: wrath at the bottom, then (proceeding clockwise) envy, greed, gluttony, sloth, extravagance (later replaced with lust), and pride, using scenes from life rather than allegorical representations of the sins.

At the centre of the large circle, which is said to represent the eye of God, is a "pupil" in which Christ can be seen emerging from his tomb. Below this image is the Latin inscription Cave cave d[omi]ns videt ("Beware, Beware, The Lord Sees").

Above and below the central image are inscription in Latin of Deuteronomy 32:28–29, containing the lines "For they are a nation void of counsel, neither is there any understanding in them", above, and "O that they were wise, that they understood this, that they would consider their latter end!" below.

In 1560, Felipe de Guevara wrote about a pupil of Bosch, an unnamed discipulo (pupil), who was as good as his master and even signed his works with his master's name. Immediately after this, and without starting a new paragraph, Guevara refers to the painting of the Seven Deadly Sins as characteristic of his style. This led some scholars, as early as Dollmayr (1898) and most vocally Stechow (1966), to ascribe the work to this pupil.

Most experts have argued since, however, that given the highly ambiguous nature of the passage, Guevara had probably returned to a description of the works of Bosch himself. Furthermore, the accuracy and authority of Guevara is suspect: when in 1570 Guevara's heirs sold a copy of The Haywain Triptych to Phillip II of Spain, it was made clear that Guevara had regarded that work as the original painted by Bosch himself, whilst nowadays it is known that his was a copy (displayed in El Escorial), of the original hanging in Prado. Phillip II of Spain himself purchased the work (prior to 1560, probably from a monastery art sale) in the belief that The Seven Deadly Sins was a Bosch original, and he always regarded it as such. It was his favourite Bosch painting and it hung in his own bedroom in El Escorial. When he donated the painting to El Escorial in 1574, it was cataloged as being a Bosch original; Silva Maroto argued that it is hard to believe that Guevara would question the authorship of Phillip's favourite Bosch in an ambiguous manuscript that remained unpublished until 1788.

The alleged poor quality of the drawing had led to the incorrect belief it dates from Bosch's early period. The attribution to the discipulo was revived in the catalogue of the 2001 Bosch exhibition in Rotterdam, by Vermet and Vandenbroeck, who also suggested that several of the costumes suggest a much later date, around 1500, so that the awkward drawing and execution cannot be attributed to youthful imperfection. They also noted that the painting is not on oak, adding to their doubts about the attribution to Bosch.