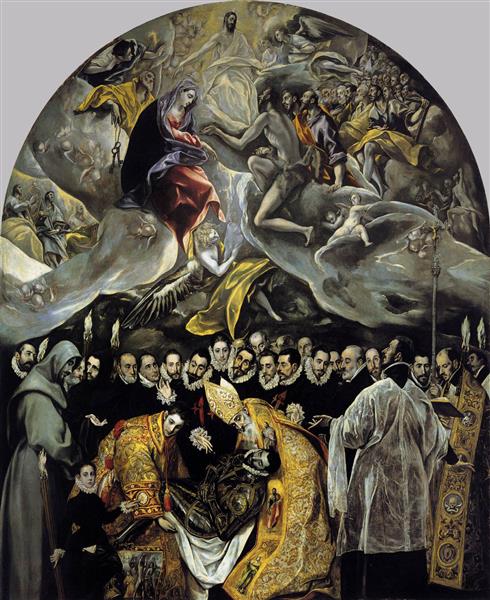 The Burial of the Count of Orgaz

The Burial of the Count of Orgas is widely considered one of El Greco’s masterpieces. The painting depicts a popular legend, regarding the Count of Orgas, who was a pious man, and who upon his death left a large sum of money to the church. The legend tells that Saint Stephen and Saint Augustine descended from heaven at his funeral and buried them with their own hands. Andres Nunes, the parish priest of Sao Tome, was the commissioner of the work, who intended it for a project to refurbish the Count’s burial chapel. According to the commission, the observers of the burial were to be portraits of the notable men of Toledo at the time. The successful inclusion of a gallery of portraits of prominent men secured its esteem, and helps to rank El Greco as a master of his time.

The Burial of the Count of Orgaz (Spanish: El Entierro del Conde de Orgaz) is a painting by El Greco, a Greek painter, sculptor, and architect of the Spanish Renaissance. Widely considered among his finest works, it illustrates a popular local legend of his time. An exceptionally large painting, it is very clearly divided into two sections, heavenly above and terrestrial below, but it gives little impression of duality. The upper and lower sections are brought together compositionally.

The theme of the painting is inspired from a legend of the beginning of the 14th century. In 1312, a certain Don Gonzalo Ruiz, native of Toledo, and Señor of the town of Orgaz, died (his family later received the title of Count, by which he is generally and posthumously known). The Count of Orgaz was a pious man who, among other charitable acts, left a sum of money for the enlargement and adornment of the church of Santo Tomé (El Greco's parish church). He was also a philanthropist and a right-thinking Knight. According to the legend, at the time he was buried, Saint Stephen and Saint Augustine descended in person from the heavens and buried him by their own hands in front of the dazzled eyes of those present.

The painting was commissioned by Andrés Núñez, the parish priest of Santo Tomé, for the side-chapel of the Virgin of the church of Santo Tomé, and was executed by El Greco between 1586–1588. Núñez, who had initiated a project to refurbish the Count's burial chapel, is portrayed in the painting reading.

Already in 1588, people were flocking to Orgaz to see the painting. This immediate popular reception depended, however, on the lifelike portrayal of the notable men of Toledo of the time. It was the custom for the eminent and noble men of the town to assist the burial of the noble-born, and it was stipulated in the contract that the scene should be represented in this manner.

El Greco would pay homage to the aristocracy of the spirit, the clergy, the jurists, the poets and the scholars, who honored him and his art with their esteem, by immortalizing them in the painting. The Burial of the Count of Orgaz has been admired not only for its art, but also because it was a gallery of portraits of the most eminent social figures of that time in Toledo. Indeed, this painting is sufficient to rank El Greco among the few great portrait painters.

The painting is very clearly divided into two zones; above, heaven is evoked by swirling icy clouds, semiabstract in their shape, and the saints are tall and phantomlike; below, all is normal in the scale and proportions of the figures. The upper and lower zones are brought together compositionally (e.g., by the standing figures, by their varied participation in the earthly and heavenly event, by the torches, cross etc.).

The scene of the miracle is depicted in the lower part of the composition, in the terrestrial section. In the upper part, the heavenly one, the clouds have parted to receive this just man in Paradise. Christ clad in white and in glory, is the crowning point of the triangle formed by the figures of the Madonna and Saint John the Baptist in the traditional Orthodox composition of the Deesis. These three central figures of heavenly glory are surrounded by apostles, martyrs, Biblical kings and the just (among whom was Philip II of Spain, though he was still alive).