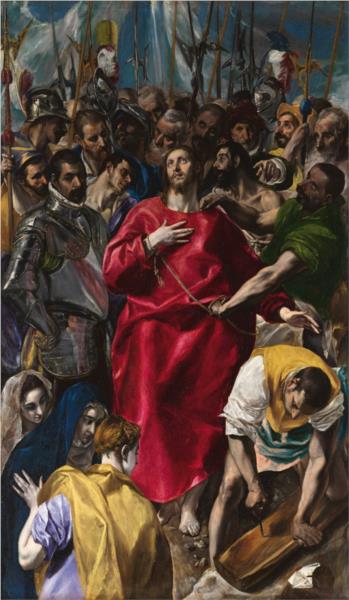 The Disrobing of Christ

The Disrobing of Christ, otherwise known as El Espolio, was commissioned for the High Altar of the sacristy of the Cathedral of Toledo, in which it still resides today. El Greco secured the commission due to his friendship with Luis, the son of the Dean of the Cathedral, Diego de Castilla, who also commissioned his other great religious work, the paintings for the church of Santo Domingo el Antiguo, in Toledo. El Greco worked on both paintings simultaneously. Upon delivery, the church officials did not agree with some of the elements of the painting, including the addition of the three Marys in the foreground and that fact that Christ’s executioners are above him in the composition. This led to a legal dispute over the price of the painting, for which El Greco only received 350 out of the 950 ducats he was promised.

The Disrobing of Christ or El Expolio (Latin: Exspolĭum) is a painting begun in the summer of 1577 and completed in the spring of 1579 for the High Altar of the sacristy of the Cathedral of Toledo, where it still normally hangs. In late 2013 it was on temporary display at the Prado in Madrid (with the other El Grecos), following a period of cleaning and conservation work there; it was returned to Toledo in 2014. It is one of El Greco's most famous works. A document dated July 2, 1577 which refers to this painting is the earliest record of El Greco's presence in Spain. The commission for the painting was secured thanks to El Greco's friendship from Rome with Luis, the son of Diego de Castilla, the dean of the Cathedral of Toledo. De Castilla senior also arranged El Greco's other major commission, on which he worked simultaneously, the paintings for the Toledan church of Santo Domingo el Antiguo.

The painting shows Christ looking up to Heaven with an expression of serenity; His idealized figure seems segregated from the other people and the violence surrounding him. A figure dressed in black in the background points at Christ accusingly, while two others argue over who will have His garments. A man in green to Christ's left holds Him firmly with a rope and is about to rip off His robe in preparation for his crucifixion. At the lower right, a man in yellow bends over the cross and drills a hole to facilitate the insertion of a nail to be driven through Christ's feet. The radiant face of the Savior is violently juxtaposed to the coarse figures of the executioners, who are amassed around Him creating an impression of disturbance with their movements, their gestures and lances.

Christ is clad in a bright red robe; it is on this red tunic that El Greco concentrated the full expressive force of his art. The purple garment (a metonymic symbol of the divine passion) is spread out in a light fold; only the chromatic couple of yellow and blue in the foreground raises a separate note which approaches, in power, the glorifying hymn of the red.

In the left foreground, the three Marys contemplate the scene with distress. Their presence was objected to by the Cathedral authorities, since they are not mentioned as present at this point in the Gospels. Greco probably took this detail, with some others like the rope around Christ's wrists, from the account in the Meditations on the Passion of Jesus Christ by Saint Bonaventure. The placement of the tormentors higher than the head of Christ also was cited by the commissioners of the Cathedral in the arbitration process over the price.

In designing the composition vertically and compactly in the foreground El Greco seems to have been motivated by the desire to show the oppression of Christ by his cruel tormentors. The figure of Christ, robust, tall and tranquil, dominates the center of the composition which is built vertically like a wall. El Greco chose a method of space elimination that is common to middle and late 16th-century Mannerists. According to Wethey, El Greco "probably recalled late Byzantine paintings in which the superposition of heads row upon row is employed to suggest a crowd".