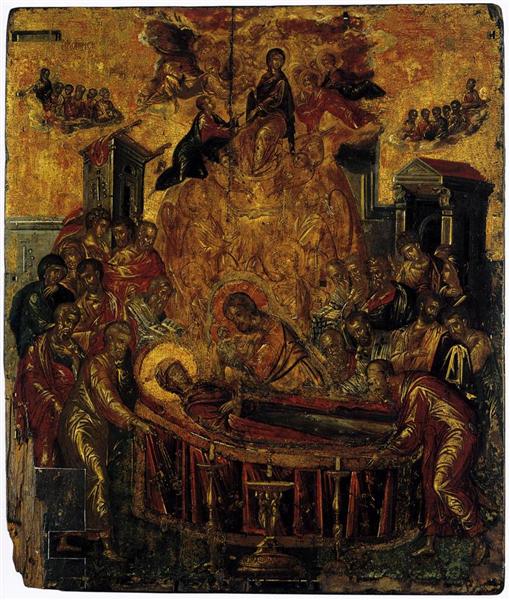 Dormition of the Virgin

One of El Greco’s earlier works, The Dormition of the Virgin was not attributed to him until 1983, when his signature was discovered at the bottom of the painting. This discovery led to the attribution of more of his earlier works, including Modena Triptych and Adoration of the Magi. The discovery of this piece as an El Greco painting has led to insights on his artistic style and subject matter. Painted in the Byzantine manner, this painting suggests that the artist changed his painting style in order to fit the subject matter and other requirements of the painting, including the desired location.

El Greco painted his Dormition of the Virgin near the end of his Cretan period, probably before 1567. El Greco's signature on the base of the central candelabrum was discovered in 1983. The discovery of the Dormition led to the attribution of three other signed works of "Doménicos" to El Greco (Modena Triptych, St. Luke Painting the Virgin and Child, and The Adoration of the Magi) and then to the acceptance as authentic of more works, signed or not (such as The Passion of Christ (Pietà with Angels), painted in 1566).

This discovery constituted a significant advance in the understanding of El Greco's formation and early career. The painting combines post-Byzantine and Italian mannerist stylistic and iconographic elements. El Greco is now seen as an artist with a formative training on Crete; a series of works illuminate the style of early El Greco, some painted while he was still in Crete, some from his period in Venice, and some from his subsequent stay in Rome.

The icon, which retains its function as an object of veneration in the Church of the Dormition of the Virgin in Syros, was probably brought to the island during the Greek War of Independence. The icon conforms closely to the established pattern for this subject, which was very common in the Orthodox Church in which El Greco was raised and was influenced by. Nevertheless, it has lost some elements of the traditional Byzantine austerity, adopting traits of the Renaissance engravings.

The composition of the Burial of the Count of Orgaz has been closely related to the Byzantine iconography of the Dormition of the Theotokos. The examples that have been used to support this point of view have a close relationship with the icon of the Dormition by El Greco that was discovered in 1983 in the church of the same name in Syros. Marina Lambraki-Plaka believes that such a connection exists. Robert Byron, according to whom the iconographic type of the Dormition was the compositional model for The Burial of the Count of Orgaz, asserts that El Greco as a genuine Byzantine painter worked throughout his life with a repertoire of components and motifs at will, depending on the narrative and expressive requirements of the art.