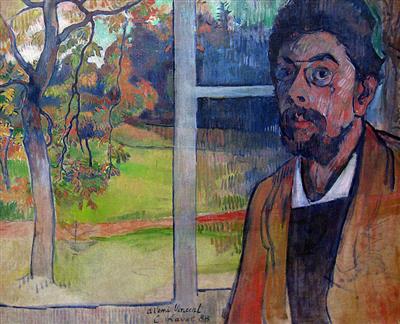 Charles Laval (17 March 1862 – 27 April 1894) was a French painter associated with the Synthetic movement and Pont-Aven School.


Laval was born in Paris, and was a contemporary and friend of Paul Gauguin and Vincent van Gogh. Gauguin created a portrait of him in 1886 looking at one of Gauguin's ceramic sculptures, entitled Still Life with Profile of Laval.


Paul Gauguin and Laval both came to Pension Gloanec in Pont-Aven in 1886 and became friends.
In search of an exoticism that could provide the key to art, Gauguin and Laval went to Panama in 1887. To gain some subsidies, Laval performs academic portraits (all lost), using his experience received from Leon Bonnat. A series of mishaps caused Laval and Gauguin to leave Central America for the island of Martinique. There he made a small series of landscapes speckled with bright colors, that have been erroneously attributed to Gauguin in the past. Laval died of an illness complicated by tuberculosis in 1894 at the age of 32.


Laval’s self-portrait came about because of an agreement between Van Gogh and several of his friends. Van Gogh asked Laval, Paul Gauguin and Émile Bernard to send him a portrait, in exchange for one of his own self-portraits.


Van Gogh was impressed by Laval's contribution. He included a small drawing of the Laval portrait in a letter to Theo, in order to give his brother an idea of the painting. He described Laval's painting as powerful, distinguished and precisely one of the paintings that you talk about: that one has in one's possession before others have recognized the talent.


Thanks and God Bless