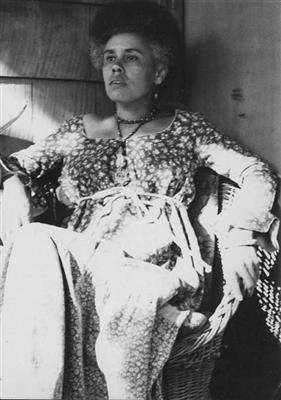 Betye Irene Saar (born July 30, 1926) is an African-American artist known for her work in the medium of assemblage. Saar has been called "a legend" in the world of contemporary art. She is a visual storyteller and an accomplished printmaker. Saar was a part of the Black Arts Movement in the 1970s, which engaged myths and stereotypes about race and femininity. Her work is considered highly political, as she challenged negative ideas about African Americans throughout her career; Betye Saar is best known for her art work that critiques American racism toward Blacks. She is represented by Los Angeles based gallery Roberts Projects.


Betye Saar was born Betye Irene Brown on July 30, 1926, to Jefferson Maze Brown and Beatrice Lillian Parson in Los Angeles, California. Both parents attended the University of California, Los Angeles, where they met. Saar spent her early years in Los Angeles. After her father's death in 1931, Saar and her mother, brother, and sister moved in with her paternal grandmother, Irene Hannah Maze in the Watts neighborhood in Los Angeles. The family then moved to Pasadena, California, to live with Saar's maternal great-aunt Hatte Parson Keys and her husband Robert E. Keys. Growing up, Saar collected various ephemera and regularly created and repaired objects. Her college education began with art classes at Pasadena City College and continued at the University of California, Los Angeles, after receiving a tuition award from an organization that raised funds to send minority students to universities. Saar received a B.A. in design in 1947. She went on to graduate studies at California State University, Long Beach, University of Southern California, California State University, Northridge, and American Film Institute. During her time in graduate school, she married Richard Saar and gave birth to three daughters: Tracye, Alison and Lezley Saar.


Saar started her adult life as a social worker and then later pursued her passion in art. She began her graduate education in 1958, originally working towards a career in teaching design. However, a printmaking class she took as an elective changed the direction of her artistic interests. She described printmaking as her "segue from design into fine arts."


In Saar's early work she collected racist imagery and continued throughout her career. She was inspired to create assemblages by a 1967 exhibition by found object sculptor, Joseph Cornell. She was also greatly influenced by Simon Rodia's Watts Towers, which she witnessed being built in her childhood. Saar said that she was "fascinated by the materials that Simon Rodia used, the broken dishes, sea shells, rusty tools, even corn cobs—all pressed into cement to create spires. To me, they were magical."


She began to create work that consisted of found objects arranged within boxes or windows, with items that drew from various cultures to reflect her own mixed ancestry: African-American, Irish, and Native American.


Saar was raised by her Aunt Hattie, who influenced her identity as a Black woman. Saar described her Aunt as a woman with dignity and poise, which impacted her depiction of the Black female body. This impact is evident in a work Saar dedicated to her Aunt titled, Record For Hattie, 1972. Saar's rejection of white feminism initially pushed her artistic focus on the Black male but in the 1970s she shifted her focus to the Black female body. Record For Hattie is a mixed media assemblage made from an antique jewelry box. Inside the top of the jewelry box is a broken picture frame containing a faded picture of a woman, representing her Aunt Hattie. Surrounding the picture frame rose materials are sewn along with a red and white star and crescent moon pendent. In the bottom of the jewelry box there is a metal cross on the right side, a red leather wallet in the middle, on top is an image of child, and on the left there are sewing materials. During the 1970s Saar responded to the racism, fetishization, and eroticization of the Black female body by reclaiming the Black female body. Saar's work resisted the artistic style of primitivism, as well as the white feminist movement that refused to address issues of race. Saar's work is a result of the convergence of Black power, spirituality and mysticism, and feminism, as seen in Black Girl's Window, 1969. Black Girl's Window is an assemblage piece made from an old window, in which the painted silhouette of a girl presses her face and hands against the pane. Above her head are nine smaller window panes arranged three by three, which display various symbols and images, including moons and stars, a howling wolf, a sketched skeleton, an eagle with the word "love" across its chest, and a tintype woman.