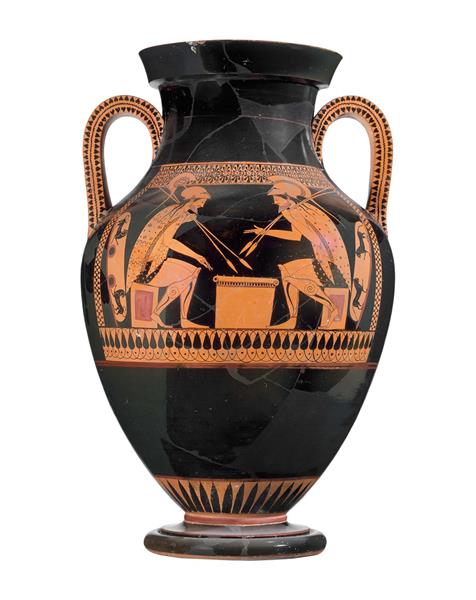 This amphora is decorated on both sides but in different painting techniques. One side has a scene depicted in the Red Figure style, and the other side shows the same scene in the Black Figure style. This type of decoration puts the vase into the so-called Bilingual group.
The traditional attributions for the painter is: the Red Figure (side A) is by the Andokides Painter, and the Black Figure (side B) is by the Lysippides Painter.

This scene, known from other representations in Greek art, depicts the heroes Achilles and Ajax playing a board game. The warriors wear their helmets and hold two spears each. Ajax has his right hand near the board, ready to play when his turn comes. Both heroes wear short tunics (chitoniskoi), and are armed, with corslet, cushes, greaves; they wear short cloaks over their armour. Behind them, their shields lean against something, with their helmets perched on top; behind them, or beside them at arm’s reach. Both sit with the hither leg drawn back; Ajax is farther from the table than Achilles, although he sits farther forward on his block (thakos).

Condition: Large pieces have been restored. On Side A, heads are restored.