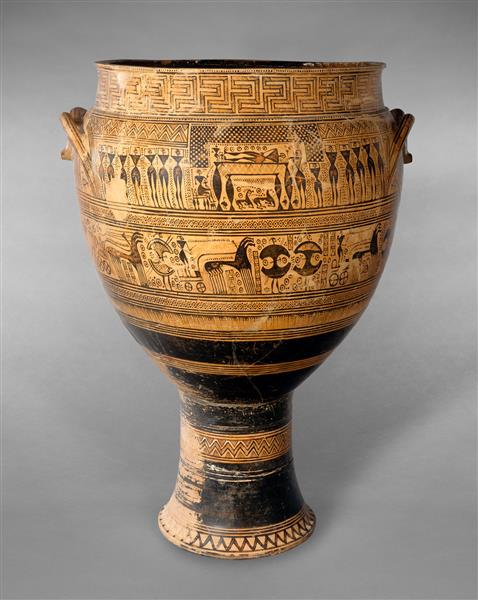 Monumental grave markers were first introduced during the Geometric period. They were large vases, often decorated with funerary representations. It was only in the Archaic period that stone sculptures were used as funerary monuments. On this magnificent krater, the main scene occupies the widest portion of the vase and shows the deceased laid upon a bier surrounded by members of his household and, at either side, mourners. For optimal clarity, the dead man is shown on his side, and the checkered shroud that would normally cover the body has been raised and regularized into a long rectangle with two projections. The zone below shows a procession of chariots and foot soldiers. The figures may refer to the military exploits of the deceased. Because hourglass shields and chariots played a more limited role at this time than in the earlier Bronze Age, the scene more likely evokes the glorious ancestry and traditions to which the dead man belonged.

Attributed to the Hirschfeld Workshop