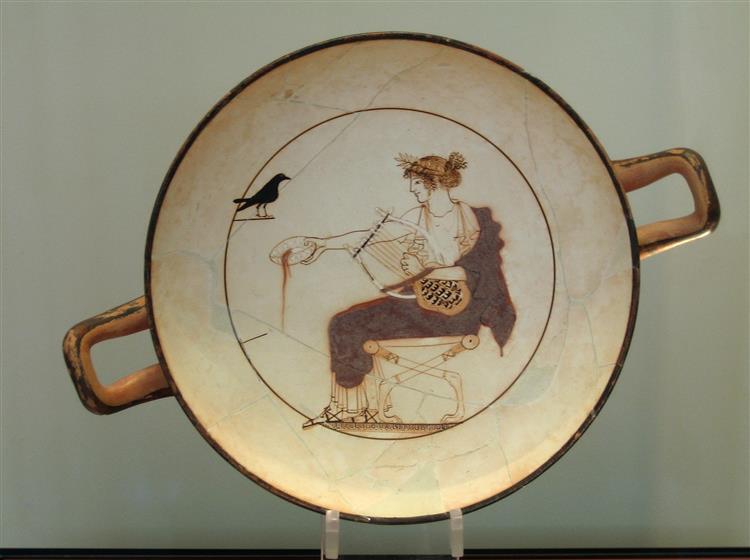 This Attic White Ground kylix of the early 5th century BC has a most distinctive depiction of the Apollo. The god wears a white sleeveless chiton, which is fastened with pins at the shoulders, and a red himation wrapped around the lower part of his body. He sits on a cross-legged stool. A myrtle wreath garnishes his carelessly bound hair. He performs a libation by pouring wine out of a bowl with his right hand, while holding a seven-stringed lyre, whose sound-box is made of a turtle-shell, in his left hand. A raven looks on. This scene could allude to the myth of King Phlegyas's daughter Koronida (from the Greek korone = raven), who was in love with Apollo, although some scholars believe it is simply a bird with prophetic powers. These colourful figures on a white background are typical of Attic vase-painting of the early 5th century BC. This kylix is the work of an unknown artist, which some scholars identify with the so-called Berlin painter.

The few pottery exhibits of the Delphi Archaeological Museum include a famous shallow bowl kylix with an unusual depiction of the god Apollo. In the white-ground red-figure technique, it was found in a grave underneath the museum.


It is the work of an Attic workshop, around 480–470 BC. Scholars have suggested Euphronios or Onesimos as the painter, or described it as in the manner of the Pistoxenos Painter. The scene depicted evokes the verse from the second hymn to Apollo found inscribed on the southern wall of the Treasury of the Athenians: “Sing for the gold-haired Pythios who aims far with his bow and arrow and plays nicely the lyre”.


Inside the cylix Apollo is depicted with an elaborate hairdo and a laurel wreath on his head, sitting on a chair, the legs of which end up in lion's paws. The god wears a white chiton, a red himation (cloak) and sandals. A seven-stringed lyre is attached to his left hand with a red stripe, whereas with his right hand he pours a libation out of a shallow bowl (patera) decorated with patterns in relief. Opposite the god is a black bird, for which several explanations have been offered: it is identified either as a oracular bird or as a crow which brought to Apollo the message that his beloved Koronis, daughter of king Phlegyas, was getting married.