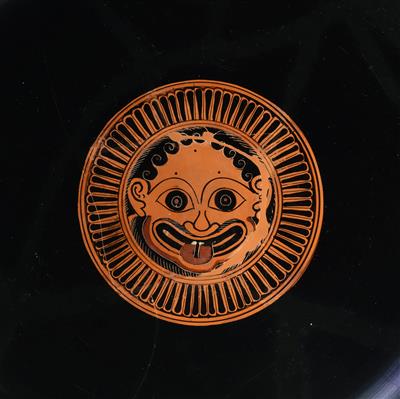 Ancient Greek pottery, due to its relative durability, comprises a large part of the archaeological record of ancient Greece, and since there is so much of it (over 100,000 painted vases are recorded in the Corpus vasorum antiquorum), it has exerted a disproportionately large influence on our understanding of Greek society. The shards of pots discarded or buried in the 1st millennium BC are still the best guide available to understand the customary life and mind of the ancient Greeks. There were several vessels produced locally for everyday and kitchen use, yet finer pottery from regions such as Attica was imported by other civilizations throughout the Mediterranean, such as the Etruscans in Italy. There were various specific regional varieties, such as the South Italian ancient Greek pottery.


Throughout these places, various types and shapes of vases were used. Not all were purely utilitarian; large Geometric amphorae were used as grave markers, kraters in Apulia served as tomb offerings and Panathenaic Amphorae seem to have been looked on partly as objets d’art, as were later terracotta figurines. Some were highly decorative and meant for elite consumption and domestic beautification as much as serving a storage or other function, such as the krater with its usual use in diluting wine.


Earlier Greek styles of pottery, called "Aegean" rather than "Ancient Greek", include Minoan pottery, very sophisticated by its final stages, Cycladic pottery, Minyan ware and then Mycenaean pottery in the Bronze Age, followed by the cultural disruption of the Greek Dark Age. As the culture recovered Sub-Mycenaean pottery finally blended into the Protogeometric style, which begins Ancient Greek pottery proper.


The rise of vase painting saw increasing decoration. Geometric art in Greek pottery was contiguous with the late Dark Age and early Archaic Greece, which saw the rise of the Orientalizing period. The pottery produced in Archaic and Classical Greece included at first black-figure pottery, yet other styles emerged such as red-figure pottery and the white ground technique. Styles such as West Slope Ware were characteristic of the subsequent Hellenistic period, which saw vase painting's decline.


Interest in Greek art lagged behind the revival of classical scholarship during the Renaissance and revived in the academic circle round Nicholas Poussin in Rome in the 1630s. Though modest collections of vases recovered from ancient tombs in Italy were made in the 15th and 16th centuries these were regarded as Etruscan. It is possible that Lorenzo de Medici bought several Attic vases directly from Greece; however the connection between them and the examples excavated in central Italy was not made until much later. Winckelmann's Geschichte der Kunst des Alterthums of 1764 first refuted the Etruscan origin of what we now know to be Greek pottery yet Sir William Hamilton's two collections, one lost at sea the other now in the British Museum, were still published as "Etruscan vases"; it would take until 1837 with Stackelberg's Gräber der Hellenen to conclusively end the controversy.


Much of the early study of Greek vases took the form of production of albums of the images they depict, however neither D'Hancarville's nor Tischbein's folios record the shapes or attempt to supply a date and are therefore unreliable as an archaeological record. Serious attempts at scholary study made steady progress over the 19th century starting with the founding of the Instituto di Corrispondenza in Rome in 1828 (later the German Archaeological Institute), followed by Eduard Gerhard's pioneering study Auserlesene Griechische Vasenbilder (1840 to 1858), the establishment of the journal Archaeologische Zeitung in 1843 and the Ecole d'Athens 1846. It was Gerhard who first outlined the chronology we now use, namely: Orientalizing (Geometric, Archaic), Black Figure, Red Figure, Polychromatic (Hellenistic).