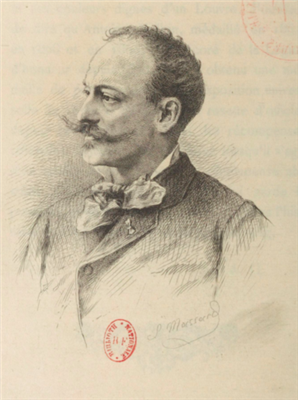 
Leloir received his early art education from his parents and his maternal grandfather, Alexandre Colin, who had been a pupil of Girodet. In 1860, Leloir entered the École des Beaux-Arts and made several attempts to win the prestigious Prix de Rome. In 1861, he won a Second Grand Prix with The Death of Priam (Museum of Art and Archeology, Guéret), then again in 1862, 1863, and again won a Second Grand Prize in 1864 with Homer on the island of Scyros (Unterlinden Museum, Colmar). He received a medal at the Paris Exposition in 1878. He also distinguished himself in the contest of the Half-figure Painted in 1864.


Specializing in historical subject matter and genre scenes, he participated in the Salon as early as 1863, with a scene of the Massacre of Innocents (Musée Bernard-d'Agesci, Niort). His work The Fight of Jacob with the Angel (Roger Quilliot Art Museum in Clermont-Ferrand) presented at the Salon of 1865 is an example of his virtuosity. From 1868, he directed his painting towards genre scenes, drawing inspiration from medieval everyday life, from the interiors of the Grand Siècle, in the Dutch manner, and in Orientalist scenes. He illustrated some editions published by Damase Jouaust, and also illustrated books by Molière and other notable authors. He participated in the foundation of the Society of French Watercolourists in 1879. He was made a Chevalier of the Legion of Honor in 1876.