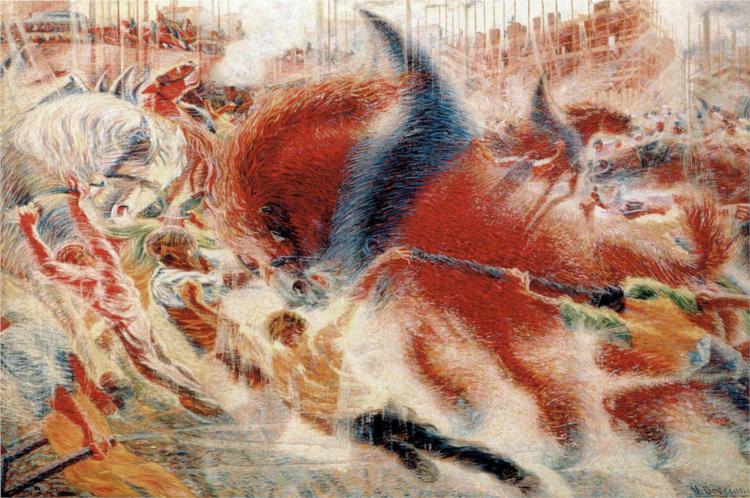 The City Rises is considered by many to be the very first truly Futurist painting. Boccioni took a year to complete it and it was exhibited throughout Europe shortly after it was finished. It testifies to the hold that Neo-Impressionism and Symbolism maintained on the movement's artists even after Futurism was inaugurated in 1909. It was not until around 1911 that Boccioni adapted elements of Cubism to create a distinct Futurist style. Nevertheless, The City Rises does capture the group's love of dynamism and their fondness for the modern city. A large horse races into the foreground while several workers struggle to gain control of it, suggesting a primeval conflict between humanity and beasts. The horse and figures are blurred, communicating rapid movement while other elements, such as the buildings in the background, are rendered more realistically. At the same time, the perspective teeters dramatically in different sections of the painting.

The City Rises (La città che sale) (1910) is a painting by the Italian painter Umberto Boccioni. It was his first major Futurist work.

The original title of the painting was Il lavoro (Work), as it appeared at the Mostra d'arte libera (Exhibition of free art) in Milan in 1911. Though realistic elements are present, such as the building, and the space is still rendered through perspective, this painting is considered the first really futurist work by Umberto Boccioni, even though it is not markedly different from his several previous works centered on suburbs. In this painting the naturalistic vision of the previous works is partly abandoned, replaced by a more dynamic vision.

Buildings in construction in a suburb can be seen with chimneys in the upper part, but the most of the space is occupied by men and horses, melted together in a dynamic effort. Boccioni thus emphasizes some among the most typical elements of futurism, the exaltation of human work and the importance of the modern town, built around modern necessities. The painting portrays the construction of a new city, with developments and technology. Suburbs, and the urban environment in general, formed the basis of many of Boccioni's paintings, from the capture of the staccato sounds of construction in Street-pavers to the riot of sound and colour offered to the observer of street scenes, as typified by The Street Enters the House.

In 1912 the picture was bought by the musician Ferruccio Busoni during the travelling futurist art exposition in Europe. It has been exhibited in the Museum of Modern Art in New York City as part of their permanent collection.