{{selectedLanguage.Name}}
Sign In Sign out
Action History
×
Home/ Artists / Romanticism .../ Thomas Cole/ The Course of Empire: The Consummation of the Empire 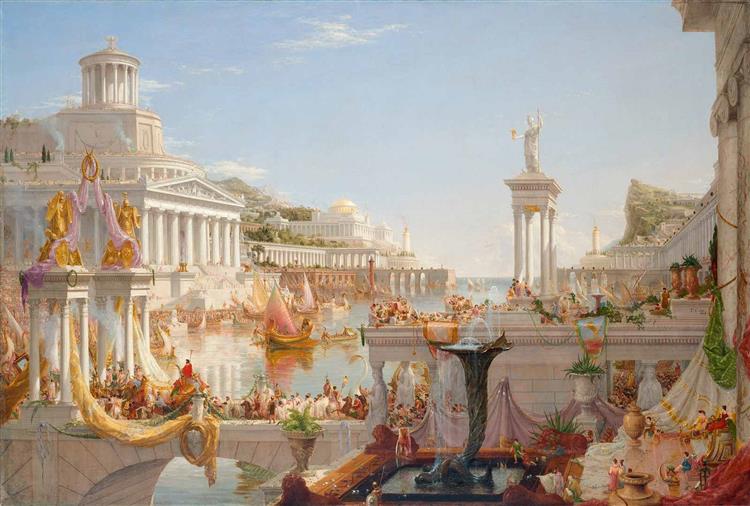 The Course of Empire: The Consummation of the Empire

In the late 1820s, the young Thomas Cole quickly built a successful career as a painter of Hudson River landscapes, but he harbored ambitions of turning the landscape form to a larger purpose. As early as 1827 he conceived a cycle of paintings that would illustrate the rise and fall of a civilization, and a few years later he began sketching and developing his ideas.

The Consummation of Empire is one of a sequence of five paintings entitled The Course of Empire commissioned by Cole's patron Luman Reed, created between 1833 and 1836. Each painting in the series depicts the same landscape at a different stage of the rise and fall of an imaginary civilization. This middle painting in the series represents the apparent triumph of that civilization, a scene crammed with classical porticos, rotundas, and statuary, with a happy, colorful procession of citizens passing over the bridge in the center. A statue of Minerva, goddess of wisdom, stands to the right but seems to be ignored by the hordes beneath.

The whole series was intended to serve as a warning about the over-weaning ambitions of Empire. Even this depiction of Empire at the height of its power anticipates its demise in the representation of a militaristic ruler carried aloft by the citizens. Later paintings in the sequence show the ruin of the city, and its eventual reclamation by nature, which in this image seems entirely subdued (as represented by the potted plant in the foreground). Anxious to create an epic series of paintings, and inspired by the Neoclassical masterpieces he had seen firsthand during his travels in Europe in 1829-1832, Cole nonetheless showed his unique ability through The Course of Empire to capture the American spirit in his work. These paintings sound a note of both triumph - America had recently liberated itself from the British Empire - and caution: that the new state should not fall into the same traps as its European predecessors. More than that, the series seems to express Cole's anxiety about the encroaching threat of industry and urban expansion to the American landscape.

Thomas Cole’s importance and influence as an American artist exploded during the mid-1830s and his career flourished in the early 1840s. He deeply influenced his immediate peers and successive generations of American artists. He transformed the landscape genre from a reflective art to a medium of expressing historical, social, and political theory. By producing titanic icons of classical liberal, romantic, locofoco historical and social theory, Thomas Cole stands as one of the most influential fine artists in the history of liberal thought.