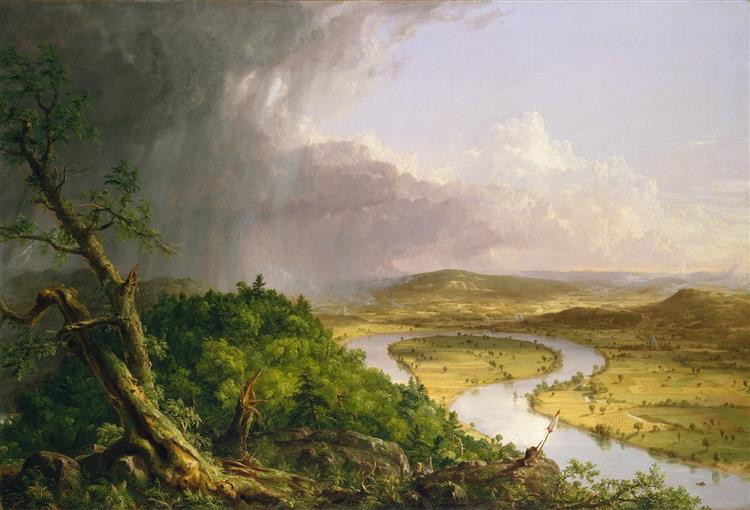 A View from Mount Holyoke, Northampton, Massachusetts, after a Thunderstorm is generally known as The Oxbow. At first glance, this painting may seem to be nothing more than an exciting view of a recognizable bend in the Connecticut River. But when viewed through the lens of n19th-century political ideology, this painting eloquently speaks about the widely discussed topic of westward expansion.

When looking at The Oxbow, the viewer can see that Cole used a diagonal line from the lower right to the upper left to divide the composition into two unequal halves. The left-hand side of the painting depicts a sublime view of the land, a perspective that elicits mood of danger and fear. This mood is enhanced by the gloomy storm clouds that seem to pummel the not-too-distant middle ground with rain. This part of the painting depicts a virginal landscape, nature created by God and untouched by man. It is wild, unruly, and untamed. Within the construction of American landscape painting, American artists often visually represented the notion of the untamed wilderness through the "Blasted Tree", a motif Cole paints into the lower-left corner. That such a formidable tree could be obliterated in such a way suggests the herculean power of Nature.

When viewed together, the right side of the painting—the view to the east—and that of the left—the west—clearly speak to the ideology of Manifest Destiny. During the 19th century, discussions of westward expansion dominated political discourse. The Louisiana Purchase of 1804 essentially doubled the size of the United States, and many believed that it was a divinely ordained obligation of Americans to settle this westward territory. In The Oxbow, Cole visually shows the benefits of this process. The land to the east is ordered, productive, and useful. In contrast, the land to the west remains unbridled. Further westward expansion—a change that is destined to happen—is shown to alter the land positively.

Although Cole was the most influential American landscape artist of the first half of the 19th century, he was not entirely adverse for figure painting. Indeed, a close look at The Oxbow, reveals an easily overlooked self-portrait in the lower part of the painting. Cole wears a coat and hat and stands before a stretched canvas placed on an easel, paintbrush in hand. The artist pauses as if in the middle of the brushstroke, to engage the viewer. This work, being a kind of "artist in his studio" self-portrait, is akin in many ways to Charles Willson Peale's work The Artist in His Museum (1822). In each, the artist depicts himself in his setting. For Peale, this was his natural history museum in Philadelphia. For Cole, this was the nature he is most well known for painting.