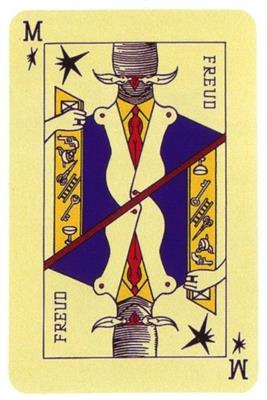 The Game of Marseille

During the 1930s Surrealism expanded outside Paris. Significant exhibitions held in London and New York marked Surrealism as a truly global movement. However, by late 1940 with Paris occupied by the Nazis and a puppet government in place at Vichy, Breton and his fellow surrealist (René Char, Oscar Dominguez, Victor Brauner, Max Ernst, Jacques Hérold, Wilfredo Lam, André Masson, Benjamin Péret) were holed up in a mansion in Marseilles waiting to go into exile to America. Max Ernst was there after having been first interned as a German national by the French and then by the Gestapo as a degenerate artist. Leonora Carrington was down below in a psychiatric institute in Madrid. Pierre Unik would end up in a concentration camp, from which he managed to escape, only to then vanish into thin air.

Being stuck, the Surrealists concentrated their energies on re-designing the standard deck of playing cards. Away with royalty, the court cards were banished and replaced by figures of Genius, Siren, and Magus. Each new figure comes from the surrealist pantheon. Sade is the Genius of Wheels, Alice (of Wonderland fame) is Siren of Stars, and Novalis is Magus of Flames, etc. The suits are neither traditional playing card suits or the tarot suits but are re-fashioned in a surrealist manner. However, the usual two black/two red color scheme is retained (there was no reason to change colors with such strong revolutionary links). The suits are Locks (Black) to represent knowledge, Stars (Black) dreams, Wheels (Red) revolution, and Flames (Red) love.

Despite the commitment to revolution, there is a notable lack of political figures represented. Hegel is the Genius of Locks, but his most famous disciple Marx is left out. Sade is represented as the Genius of Wheels, but then Sade for the Surrealists was always the apostle of total freedom. Pancho Villa, as the Magus of Wheels, is the only figure whose fame rests sorely on revolutionary politics.

In contrast, two occultist features, Helene Smith, the muse of automatic writing and medium as the Siren of Locks (incidentally, the only Siren that isn’t fictional) and Paracelsus the Renaissance doctor and occultist as the Genius of Locks. This would suggest that Surrealism was moving away from direct political action towards the occultation that Breton had posited in the Second Manifesto as the real goal of the movement. Given the Surrealist’s split with the French Communist Party, the show trials in Moscow, the Spanish Civil War, Trotsky’s assassination in Mexico City, and the Nazi-Soviet non-aggression pact, a level of disillusionment is understandable. Breton sincerely wanted Surrealism to be more than just another art movement to achieve a radical transformation of life, which he believed best effected through collective membership in a Party dedicated to revolutionary action. However, Surrealism was never to square the circle of blindly obeying Party diktats and retaining artistic autonomy.

The fact of being in Marseilles may have suggested and lent an occult slant to the whole enterprise, as the very name given to the deck, Le Jeu De Marseille, acknowledges their awareness of the Tarot De Marseille, one of the oldest and most copied of all Tarot decks. Although Le Jeu Du Marseille is limited to the standard 52 cards plus two jokers (Jarry’s Ubu Roi) and the major arcana is excluded, the Marseille reference indeed suggests that one of its many purposes is divinatory.

It may initially strike us as odd that with France occupied, Europe at war and their future so uncertain that the Surrealists should employ their time in playing around with card design. But it is entirely in keeping with Surrealism’s founding tenets, as well as pointing towards its future direction. The seriousness of games, the primacy of play over work, imagination re-claiming its rights. In the years of exile to follow and the post-war period, the increasing importance of the esoteric: alchemy, Tarot, and hermeticism. Surrealism as a secret society, a fraternity invisible to all except the initiated.

More ...
Source of the article: cakeordeathsite.wordpress.com
The Game of Marseille Artworks
View all 17 artworks