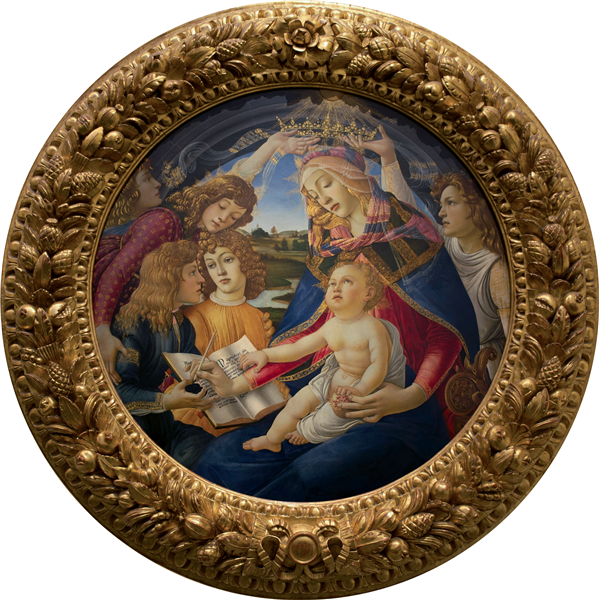 Madonna of the Magnificat

Sandro Botticelli's Madonna of the Magnificat (c.1481) depicts the Virgin Mary enthroned with the Christ child on her lap. They are attended by five angels. Two angels hold an open book, and two angels crown Mary as Queen of Heaven. This work exemplifies Botticelli's use of line, color, and composition, to draw the viewer into a vision of refined beauty. Advancing an artistic language, it combines visual naturalism and spiritual grace.

The art of Botticelli expresses a new closeness to a sacred reality: his capacity to visualize the spiritual intimacy made him one of the most sought-after painters of 15th century Florence. The Magnificat, also known as The song of Mary, is the Virgin's prayer spoken to her cousin Elizabeth in the Gospel of Luke. When they met, St. John the Baptist, in the womb of Elizabeth, exults perceiving the presence of Christ in Mary's womb. Botticelli chose not to illustrate the biblical episode of the Visitation. Instead, he imagines a scene that is theologically built on Mary's prayer, translating the spirit of the sacred expression into visual art.

Mary's Magnificat is her responsive praise to God, for the spiritual transformation that He has caused. In her right hand, the Virgin holds a quilt, by which she is writing her prayer into a book. "My soul magnifies the Lord, and my spirit rejoices in God my Savior, for he has looked on the humble estate of his servant. For behold, from now on all generations will call me blessed." In her left hand, she holds a pomegranate. The Infant Christ seems to be taking this fruit - a symbol of his passion (innumerable grains of the pomegranate corresponds to the infinite drops of blood that will pour for the salvation of Humanity.) Mary's robe is painted by Botticelli to frame Christ as if it was a tent or even a tabernacle, and Christ was emerging out of it.

The painting is suspended between two dimensions. The first one is Paradise, where the angels crown Madonna, with an impalpable tiara, to be Queen of Paradise. And the second one is Earth, where Botticelli depicted a Tuscan landscape with florentine river Arno. With his superb technique, the artist magnifies the material painting in a splendorous vision of Glory. Botticelli's art unites visual naturalism and spiritual grace. The significance of his aesthetic comes into better focus if we recognize him as a Florentine painter of devotional subjects working in the second half of the 15th century, a period in which artists developed a pictorial naturalism to connect sacred scenes to the reality. Botticelli found his own language, opening with his art a window between two worlds, material and immaterial.