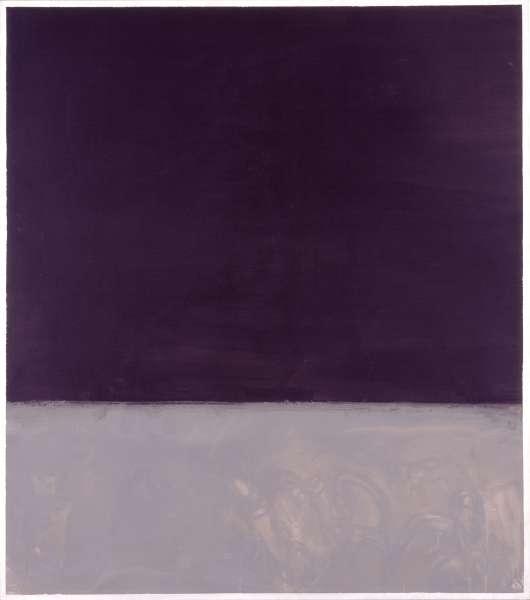 Untitled (Black and Gray) is one of the last paintings produced by Mark Rothko before he committed suicide on February 25th, 1970. The painting belongs to Rothko’s final series, which contained color-field paintings of black and grey, black and brown. Rothko demonstrated variation throughout the series by playing with color tones and scale, in paintings such as Untitled (Brown and Gray) (1969).

Many have interpreted the series, and notably Untitled (Black and Gray) as a sign of Rothko’s mental and physical diminishment. Indeed, when he was asked what the series was about, he plainly explained that it was about death. Even though he already gained success and recognition, Rothko’s last years proved strenuous. He was recovering from an aortic aneurysm, and his physical state was quickly deteriorating. It also had a significant impact on his mental state, leading to a struggle with depression. Based on accounts and conversations with friends and colleagues, the artist was worried about his legacy; he felt misunderstood and wanted to leave a lasting mark in his art. This sense of urgency was reflected in his last paintings: they were made at a rapid pace with quick strokes that generated a powerful visual impact. Because of the dark theme, some view Rothko’s last paintings as a sign of his abandonment of spirituality and meaning. However, in these paintings, he confronted the inevitable outcome of death and dealt with the temporal nature of life. The artist experimented with his brushwork and technique in an attempt to find an essential form of expression through which he could communicate his ideas to the viewer. While death was undeniably on his mind, it is essential to note that parallel to this series Rothko also produced a softer range of paintings like Untitled (Gray and Mauve) (1969).

In the horizontal composition of Untitled (Black and Gray), Rothko blurred the ‘horizon’ line by blending the two colors. Rothko’s blurred horizon can be associated with similar effects applied in landscape paintings. The color combination of black and gray can provoke an image of nightfall setting on a desolate landscape - a metaphor for death. The second significant feature of Untitled (Black and Gray) is the white margin that frames the image. The artist placed masking tape before beginning to paint and removed it at the end to create a crisp edge. For Rothko, the outside margin was as crucial as the central motif. The clean white margin provided a contrast to the free and expressive brushwork of the black and gray color fields. The margin also gives the color field clear definition and enhances the flat quality of the painting. In earlier works, Rothko used a mixture of rabbit skin glue and pigment in his first layer of color, which gave the color and painting a greater illusion of depth. However, in this series, he primed the canvas with white gesso that contributed to the lack of pictorial depth.