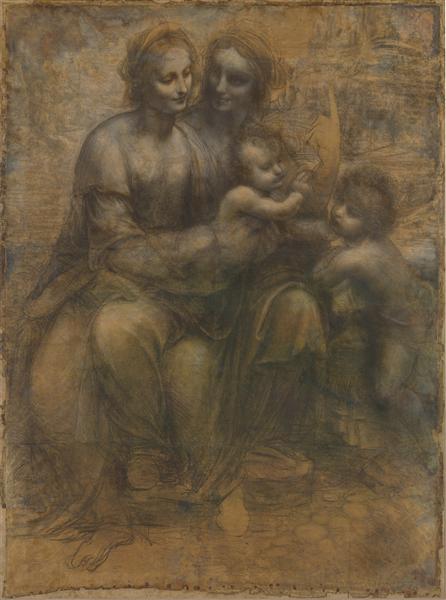 The Virgin and Child with St Anne and St John the Baptist, sometimes called The Burlington House Cartoon, is a drawing by Leonardo da Vinci. The drawing is in charcoal and black and white chalk, on eight sheets of paper glued together. Because of its large size and format the drawing is presumed to be a cartoon for a painting. No painting by Leonardo exists that is based directly on this cartoon.

The drawing depicts the Virgin Mary seated on the knees of her mother St Anne and holding the Child Jesus while St. John the Baptist, the cousin of Jesus, stands to the right. It currently hangs in the National Gallery in London. It was either executed in around 1499–1500, at the end of the artist's first Milanese period, or around 1506–8, when he was shuttling between Florence and Milan; the majority of scholars prefer the latter date, although the National Gallery and others prefer the former.

The drawing is notable for its complex composition, demonstrating the alternation in the positioning of figures that is first apparent in Leonardo's paintings in the Benois Madonna. The knees of the two women point different directions, with Mary's knees turning out of the painting to the left, while her body turns sharply to the right, creating a sinuous movement. The knees and the feet of the figures establish a strong up-and-down rhythm at a point in the composition where a firm foundation comprising firmly planted feet, widely spread knees and broad spread of enclosing garment would normally be found. While the lower halves of their bodies turn away, the faces of the two women turn towards each other, mirroring each other's features. The delineation between the upper bodies has lost clarity, suggesting that the heads are part of the same body.

The twisting movement of the Virgin is echoed in the Christ Child, whose body, held almost horizontal by his mother, rotates axially, with the lower body turned upward and the upper body turned downward. This turning posture is first indicated in Leonardo's painting in the Adoration of the Magi and is explored in a number of drawings, in particular the various studies of the Virgin and Child with a cat that are in the British Museum.

The juxtaposition of two sets of heads is an important compositional element. The angle, lighting and gaze of the Christ Child reproduces that of his mother, while John the Baptist reproduces these same elements in the face of St Anne. The lighting indicates that there are two protagonists, and two supporting cast in the scene that the viewer is witnessing. There is a subtle interplay between the gazes of the four figures. St Anne smiles adoringly at her daughter Mary, perhaps indicating not only maternal pride but also the veneration due to the one who "all generations will call...blessed". Mary's eyes are fixed on the Christ Child who raises his hand in a gesture of benediction over the cousin who thirty years later would carry out his appointed task of baptising Jesus. Although the older of the two children, John the Baptist humbly accepts the blessing, as one who would later say of his cousin "I am not worthy even to unloose his sandals." St Anne's hand, her index finger pointing towards the Heaven, is positioned near the heads of the children, perhaps to indicate the original source of the blessing. This enigmatic gesture is regarded as quintessentially Leonardesque, occurring in The Last Supper and St John the Baptist.