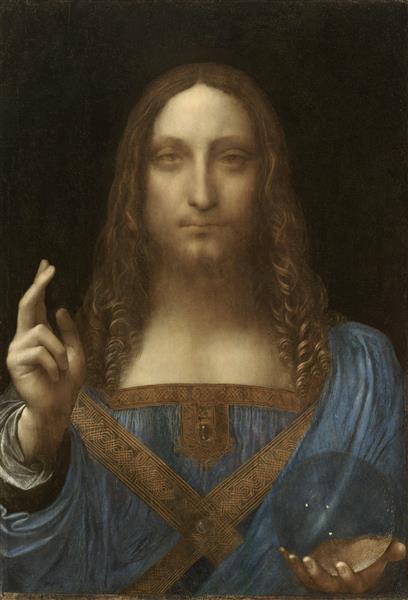 Salvator Mundi is a painting of Christ as Salvator Mundi (Latin for Savior of the World) by Italian artist Leonardo da Vinci, dated to c. 1500. The painting shows Jesus, in Renaissance dress, giving a benediction with his right hand raised and two fingers extended, while holding a transparent rock crystal orb in his left hand, signaling his role as savior of the world and master of the cosmos, and representing the 'crystalline sphere' of the heavens, as it was perceived during the Renaissance. Around 20 other versions of the work are known, by students and followers of Leonardo. Preparatory chalk and ink drawings of the drapery by Leonardo are held in the Royal Collection.

Long thought to be a copy of a lost original, veiled with overpainting, it was restored, rediscovered, and included in a major Leonardo exhibition at the National Gallery, London, in 2011–12. Although several leading scholars consider it to be an original work by Leonardo da Vinci, this attribution has been disputed by other specialists.

It is one of fewer than 20 known works by Leonardo, and was the only one to remain in a private collection. It was sold at auction by Christie's in New York to Prince Badr bin Abdullah bin Mohammed Al Farhan on behalf of the Abu Dhabi Department of Culture & Tourism on 15 November 2017, for $450.3 million, setting a new record for most expensive painting ever sold. The painting is to be on display at the Louvre Abu Dhabi.

Leonardo da Vinci's Salvator Mundi may have been painted for Louis XII of France and his consort, Anne of Brittany. It was probably commissioned around 1500, shortly after Louis conquered the Duchy of Milan and took control of Genoa in the Second Italian War. Leonardo himself moved from Milan to Florence in 1500.

It may have come to England with Henrietta Maria when she married Charles I of England in 1625, and it seems to have remained in her private chambers at the Queen's House in Greenwich. Wenceslaus Hollar made an engraving of the painting, published in Antwerp in 1650 with the inscription Leonardus da Vinci pinxit (Latin for 'Leonardo da Vinci painted it').

Charles I was executed in 1649 at the end of the English Civil War, and the painting was included in a 1649 inventory of the Royal Collection, valued at £30. Charles’s possessions were sold under the English Commonwealth, and the painting was sold in 1651 to John Stone, a mason, to settle a debt, but it was returned to Charles II of England after the English Restoration in 1660, and included in an inventory of Charles’s possessions at the Palace of Whitehall in 1666. It was inherited by James II of England and may then have passed to his mistress Catherine Sedley, Countess of Dorchester, whose illegitimate daughter with James became the third wife of John Sheffield, 1st Duke of Buckingham and Normanby. His own illegitimate son, Sir Charles Herbert Sheffield, 1st Baronet, auctioned the painting in 1763 along with other artworks from Buckingham House, when the building was sold to George III.