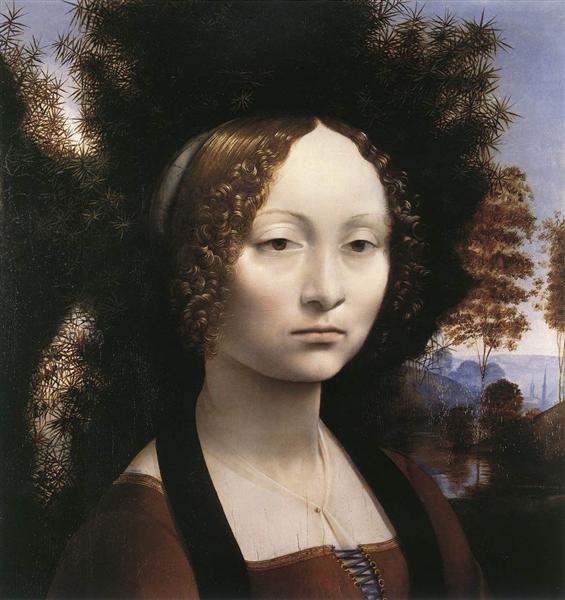 Ginevra de' Benci is a portrait painting by Leonardo da Vinci of the 15th-century Florentine aristocrat Ginevra de' Benci (born c. 1458). The oil-on-wood portrait was acquired by the National Gallery of Art in Washington, D.C. in 1967. The sum of US$5 million—an absolute record price at the time—came from the Ailsa Mellon Bruce Fund and was paid to the Princely House of Liechtenstein. It is the only painting by Leonardo on public view in the Americas.

Ginevra de' Benci, a well-known young Florentine woman, is universally considered to be the portrait's sitter. Leonardo painted the portrait in Florence between 1474 and 1478, possibly to commemorate Ginevra's marriage to Luigi di Bernardo Niccolini at the age of 16. The juniper bush that surrounds Ginevra's head and fills much of the background, serves more than mere decorative purposes. In Renaissance Italy, the juniper was regarded a symbol of female virtue, while the Italian word for juniper, ginepro, also makes a play on the sitter's name. The imagery and text on the reverse of the panel further support the identification of this picture. The reverse is decorated with a juniper sprig encircled by a wreath of laurel and palm and is memorialized by the phrase VIRTVTEM FORMA DECORAT ("beauty adorns virtue").

The Latin motto VIRTVTEM FORMA DECORAT on the reverse of the portrait, is understood as symbolizing the intricate relationship between Ginevra's intellectual and moral virtue on the one hand, and her physical beauty on the other. The sprig of juniper, encircled by laurel and palm, suggests her name. The laurel and palm are in the personal emblem of Bernardo Bembo, a Venetian ambassador to Florence whose platonic relationship with Ginevra is revealed in poems exchanged between them. Infrared examination has revealed Bembo's motto "Virtue and Honor" beneath Ginevra's, making it likely that Bembo was somehow involved in the commission of the portrait.

The portrait is one of the highlights of the National Gallery of Art, and is admired by many for its portrayal of Ginevra's temperament. Ginevra is beautiful, but austere; she has no hint of a smile and her gaze, although forward, seems indifferent to the viewer.

A strip from the bottom of the painting was removed in the past, presumably owing to damage, and Ginevra's arms and hands were lost. Using the golden section, Susan Dorothea White has drawn an interpretation of how her arms and hands may have been positioned in the original. The adaptation is based on images of hands by Leonardo that are thought to have been executed as studies for this painting.