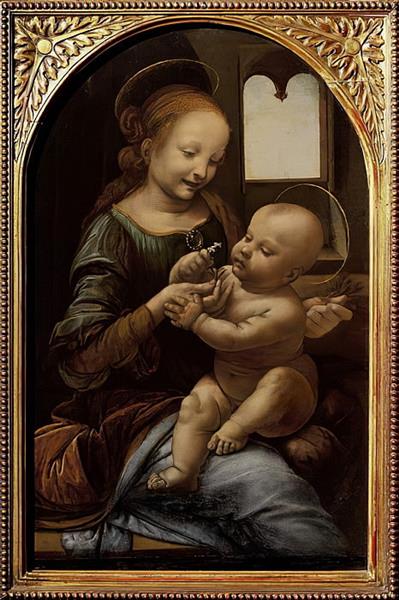 Madonna with a Flower (Madonna Benois)

Madonna and Child with Flowers, otherwise known as the Benois Madonna, could be one of two Madonnas Leonardo da Vinci had commented on having started in October 1478. The other one could be Madonna of the Carnation from Munich.

It is likely that the Benois Madonna was the first work painted by Leonardo independently from his master Verrocchio. There are two of Leonardo's preliminary sketches for this piece in the British Museum. Studies of these sketches and the painting itself suggest that Leonardo was concentrating on the idea of sight. At that time it was thought that human eyes exhibited rays to cause vision with a central beam being the most important. The child is thought to be guiding his mother's hands into his central vision.

The composition of Madonna and Child with Flowers proved to be one of Leonardo's most popular. It was extensively copied by young painters, including Raphael, whose own version of Leonardo's design (the Madonna of the Pinks) was acquired in 2004 by the National Gallery, London.

For centuries, Madonna and Child with Flowers was considered lost. In 1909, the architect Leon Benois sensationally exhibited it in Saint Petersburg as part of his father-in-law's collection. The painting had been apparently brought from Italy to Russia by the notable connoisseur Aleksey Korsakov in the 1790s. Upon Korsakov's death, it was sold by his son to the Astrakhan merchant Sapozhnikov for 1400 roubles and so passed by inheritance to the Benois family in 1880. After many a squabble regarding attribution, Leon Benois sold the painting to the Imperial Hermitage Museum in 1914. The purchase was made by Ernst Friedrich von Liphart who was the curator of paintings who had correctly identified the artist. (Ernst's father Karl was an expert on Leonardo).

Since 1914 the painting has been exhibited in the Hermitage Museum in Saint Petersburg.