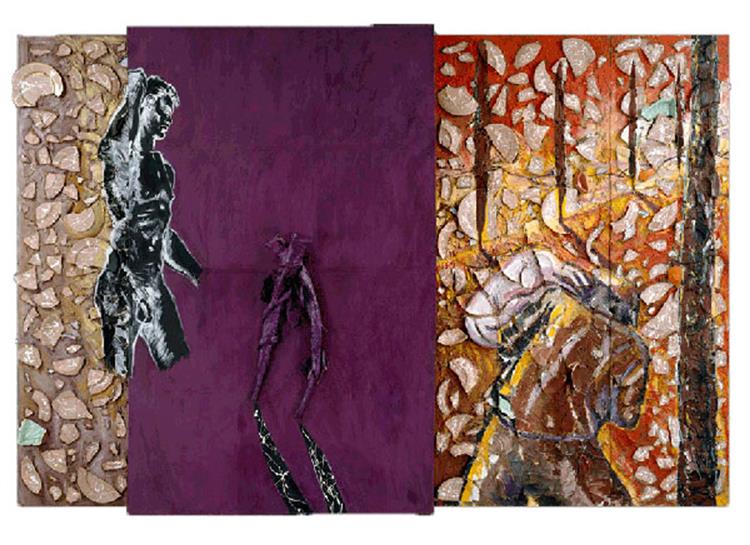 Bob’s Worlds (1980) is one of Julian Schnabel’s early 'broken plate paintings'. The origin of the 'plate technique' was Schnabel’s 1978 trip to Barcelona, Spain. There, he encountered the architecture of Antonio Gaudí and the intricate mosaic elements in Casa Milà and Park Güell. While in Barcelona, Schnabel imagined creating a giant painting covered with broken plates, which would match the size of the closet in his hotel room. After his return to New York, he implemented his vision, covering large wooden surfaces with broken dishes and thick layers of paint. The success of Schnabel and other Neo-Expressionist artists represented a shift in American art, which was dominated by Minimalism and Conceptual art in previous decades.

In this painting, Schnabel descends into art history by combining an array of references in an original and personal way. The artist divided Bob’s Worlds into three sections, like the closet in his Barcelona hotel room. The left panel is narrow and covered with fragments of broken dishes, the central panel is purple with two large intertwining flowers, and the right panel also covered with broken plates features a sturdy sower walking with a hefty stack over his shoulder. In between the left and central panel, there is a nude male figure resembling a remnant of Greco-Roman sculpture. The image of the sower is mainly associated with the paintings of Vincent Van Gogh Sower (1888) and Sower with Setting Sun (1888). The thick impasto effect further establishes a connection between Schnabel and Van Gogh. Still, at the same time, Schnabel sets himself apart by creating a unique sculptural surface with fragments of broken dishes. Expressionist painter Francis Bacon also reinterpreted the motif of the sower in paintings like Study for Portrait of Van Gogh I (1956). Even though in Bob’s Worlds, Schnabel drew inspiration from a variety of references to art history, his innovative combination created new associations for the viewer. For instance, the unique technique of broken plates can be associated with archeological remains of an ancient civilization. It also relates to the drip and splatter techniques of Abstract Expressionist painting.

The title Bob’s Worlds most likely refers to Bob Williamson, a fixture of the New York downtown culture scene during the late 1970s. He and Schnabel became close friends, and Williamson was a mentor figure for the artist. Another possibility is that Schnabel thought of Bob Mason, a young artist who was also his former assistant.