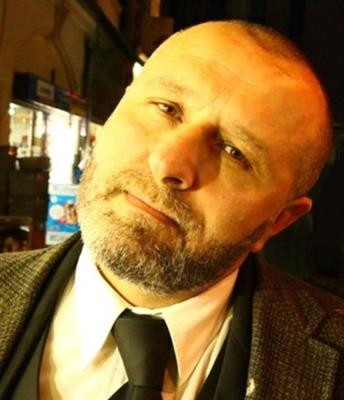 
Joe Machine (born Joseph Stokes, 6 April 1973) is an English artist, poet and writer. He is a founding member of the Stuckists art group. His work has been called "raw and autobiographical".


Joseph Machine was born in Chatham, Kent, and comes from a Romany background on the Isle of Sheppey.


In 1988 Machine was sent to Alston House Approved School, Rochester, for the theft of scrap material, and the following year to Dover Borstal for young offenders, after burgling a greengrocers in Leysdown (Isle of Sheppey). He spent time claiming benefits and running the family business, an amusement arcade in Leysdown, as well as breeding Rottweiler dogs and working as a bouncer in South London night clubs.


He started painting around 1988 and has not had any formal college art training. He has described creativity as the way out of the background in which he felt trapped: "Painting and writing have been far better for me than any of the mistakes I made in stealing and fighting."


Since 1998 he has been having psychotherapy to deal with violence and sex problems.


In 1999 he was one of the 13 original founder members of the Stuckists, an anti-conceptual art group co-founded by Billy Childish and Charles Thomson. His painting Diana Dors With an Axe was used on the front cover of the first book on the group, The Stuckists, and also to promote the show The Real Turner Prize Show in Shoreditch in 2000.


Machine has exhibited widely with the Stuckists, most notably in their first national museum exhibition, at the Walker Art Gallery for the 2004 Liverpool Biennial. The exhibition, titled The Stuckists Punk Victorian, was a definitive showing of the Stuckist oeuvre, and Machine was one of the "featured artists". Reviewing the Walker show, Mark Lawson commented, referring to Machine's painting, Sea Shanty:


In January 2005, he took part in a Stuckist protest at the launch of the Triumph of Painting show at the Saatchi Gallery in London. In December that year he was part of the Stuckist protest outside the Turner Prize at Tate Britain to draw attention to the Tate's purchase of its trustee Chris Ofili's work The Upper Room and demand the resignation of Tate Director, Sir Nicholas Serota.


Machine was one of the ten leading Stuckist artists to show in the Go West at Spectrum London gallery in October 2006, where six of his paintings sold in advance of the show opening.


Machine commented on the Stuckists: "some of the paintings are not all that marvellous ... But everyone's painting and getting involved". Billy Childish owns a Machine painting of a woman slashing her wrists, which he describes as "quite disturbing".


Machine sang with the "junk" group, The Dirty Numbers, and has published six poetry books.


In 2003 Machine married Charlotte Gavin, who has exhibited her work in Stuckist shows.


Machine's work is strongly autobiographical and often draws on life experiences of sex and violence. Machine works with a limited range of mostly five colours (which Machine claims was initially due to poverty), and has cited his grandfather, who used to paint, as a major influence.