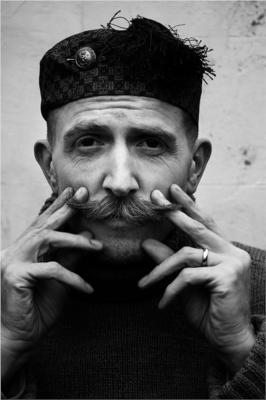 Billy Childish was born in Chatham, Kent in 1959. After leaving secondary
school at age 16, he worked at the Naval Dockyard in Chatham as an
apprentice stonemason. Initially denied an interview to the local art school,
during six months of employment at the dockyard he produced hundreds
of drawings that gained him entry to St. Martin's School of Art. Childish's
defiance to authority and his insistence on integrity and personal style above
the formalities of educational requirement led to his eventual expulsion from
art school in 1981. Childish then embarked on an artistic, literary, and musical
odyssey exploring a broad range of worldly themes including war, history,
social protest, art hate, religious philosophy, as well his own experiences of
alcoholism, and the sexual abuse he suffered as a child. Over 35 years of
continual creative activity Childish has gained a cult status worldwide; writing
and publishing over 40 volumes of confessional poetry, 5 novels, recorded
over 100 LPs, and painted several hundreds painting.

Billy Childish has had solo and group exhibitions internationally including
New York, London, Seoul and Berlin. He was included in British Art Show 5,
which toured throughout four cities - Edinburgh, Southampton, Cardiff, and
Birmingham. In 2010, he was the subject of major concurrent retrospectives at
the ICA in London and White Columns in New York, and in 2011 he became
Artist in Residence at the Chatham Historic Dockyard where he currently
works.

Billy Childish (born Steven John Hamper, 1 December 1959) is an English painter, author, poet, photographer, film maker, singer and guitarist. Since the late 1970s, Childish has been prolific in creating music, writing and visual art. He has led and played in bands including the Pop Rivets, Thee Milkshakes, Thee Headcoats, and the Musicians of the British Empire, primarily working in the genres of garage rock, punk and surf.

He is a consistent advocate for amateurism and free emotional expression. Childish co-founded the Stuckism art movement with Charles Thomson in 1999, which he left in 2001. Since then a new evaluation of Childish's standing in the art world has been under way, culminating with the publication of a critical study of Childish's working practice by the artist and writer Neal Brown, with an introduction by Peter Doig, which describes Childish as "one of the most outstanding, and often misunderstood, figures on the British art scene". He is a visiting lecturer at Rochester Independent College. In July 2014 Childish was awarded an honorary Doctor of Arts Degree from the University of Kent.

He is known for his explicit and prolific work – he has detailed his love life and childhood sexual abuse, notably in his early poetry and the novels My Fault (1996), Notebooks of a Naked Youth (1997), Sex Crimes of the Futcher (2004) – The Idiocy of Idears (2007), and in several of his songs, notably in the instrumental "Paedophile" (1992) (featuring a photograph of the man who sexually abused him on the front cover) and "Every Bit of Me" (1993). From 1981 until 1985 Childish had a relationship with artist Tracey Emin.

Thirty years after Childish's first musical releases with Thee Milkshakes and Thee Mighty Caesars, a crop of lo-fi, surf rock and punk groups with psychedelic subtexts has surfaced referencing the aesthetic established by Childish in both their band names and in various aspects of their sonic aesthetic: Thee Oh Sees, Thee Open Sex, Thee Tsunamis, Thee Dang Dangs and many others.

Billy Childish was born, lives and works in Chatham, Kent, England. He has described his father, John Hamper, as a "complex, sociopathic narcissist": Hamper was jailed during Childish's teenage years for drug smuggling. Although he had an early and close association with many of the artists who became known as "YBA" artists he has resolutely asserted his independent status. He was sexually abused when he was aged nine by a male family friend: "We were on holiday. I had to share a bed with him. It happened for several nights, then I refused to go near him. I didn't tell anyone". He left secondary school at 16, an undiagnosed dyslexic. Refused an interview at the local art college, he entered Chatham Dockyard, Kent, as an apprentice stonemason. During the next six months (the artist’s only prolonged period of conventional employment), he produced some 600 drawings in "the tea huts of hell". On the basis of this work he was accepted into Saint Martin's School of Art, where he was friends with the artist Peter Doig, to study painting. However, his acceptance was short-lived and he was expelled in 1982 before completing the course. He then lived on the dole for 15 years. In 2006 Childish turned down the offer to appear on Channel 4's Celebrity Big Brother. Childish has practised yoga and meditation since the early 1990s.