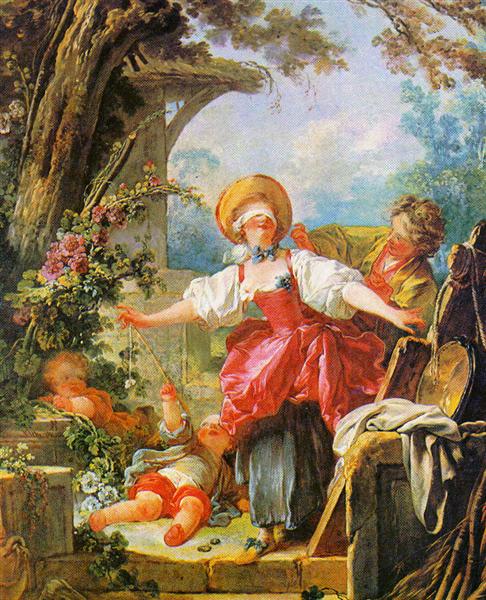 The amorous encounter in this colorful painting would surely have been understood as two lovers playing a sensual and exciting game, as the painting contains many symbolic elements. The game of Blind Man’s Bluff is the courtship of the young couple, and the female, although she is blindfolded, can surely see through her mask, and is in no danger of being mistaken. The entire scene speaks of sexual excitement, from the blushing color of the cheeks to the playful stance of the two figures. The painting also speaks not to sexual fulfillment, but the excitement of the game of courtship, just for the sheer satisfaction of playing the game. As such it is a perfect example of Fragonard’s ability to translate a sexual encounter into a coy and erotic gesture, a techniques which he had surely mastered.

Blind Man's Bluff (French: Le collin maillard) is a painting by the French Rococo painter Jean-Honoré Fragonard, produced around 1769 in oil on canvas. It is full of deceptions – the girl is looking out from under her blindfold and the game seems to be a pretext leading to seduction; the two figures are in pastoral costume, but may be noble or bourgeois figures playing at being pastoral figures; the background seems to be a wood but could be a stage set. In short, it seems to abolish the boundary between truth and lies, reality and fiction.

The painting was intended to accompany The See-Saw (1750) [1], currently, held by the Thyssen-Bornemisza Museum, in Madrid. Both are painted in the style and spirit of Fragonard's master François Boucher. Boucher's training can be seen in the ornamental flourishes of flowers and trees. But Fragonard's own skill may be seen in the brilliant composition. Blindman's bluff can be seen as a metaphor for courtship, while the rocking of the see-saw would clearly be a metaphor for the act of lovemaking itself.

Another painting of the same name was completed by Fragonard, after the artist’s second journey to Italy in 1773–74, between about 1775 and 1780. In this more expansive version well-dressed men, women and children play the familiar game in a picturesque overgrown garden. Fragonard’s favorite subject, he may have viewed the games as symbolizing the game of courtship. The painting is held by the Timken Museum of Art, in San Diego, California.

According to eighteenth-century engravings of the two paintings, both may have originally been as much as a foot higher at the top. Blind Man's Bluff was purchased by the Toledo Museum of Art with funds from the Libbey Endowment, a gift of the glass manufacturer Edward Libbey who founded the museum in 1901.