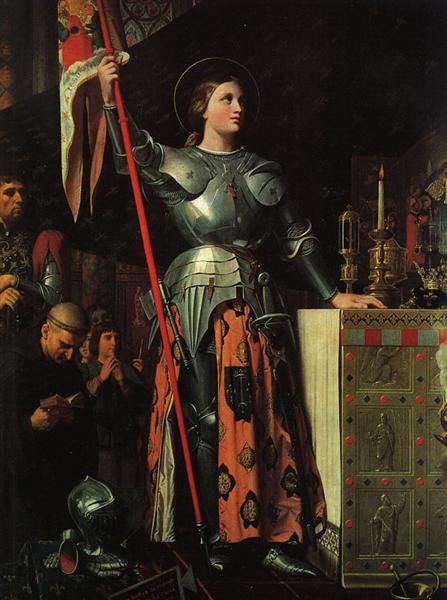 Joan of Arc at the Coronation of Charles VII (French: Jeanne d’Arc au sacre du roi Charles VII) is an 1854 painting by Jean Auguste Dominique Ingres. It is now in the Louvre Museum in Paris.

The work merges the style of Ingres' teacher Jacques-Louis David with that of the troubador style. He began with a nude model, adding the clothes and armour.

The painting was first commissioned by the director of the Academie des Belles Artes in Orléans to commemorate Joan of Arc. It shows her at the coronation of Charles VII of France in Reims Cathedral, victorious and looking up to heaven, which she felt had given France the victory. To her right are three pages, the monk Jean Paquerel, and a servant. The servant is a self-portrait of the artist. The scene is marked by ambient light, sumptuous objects and rich colours.