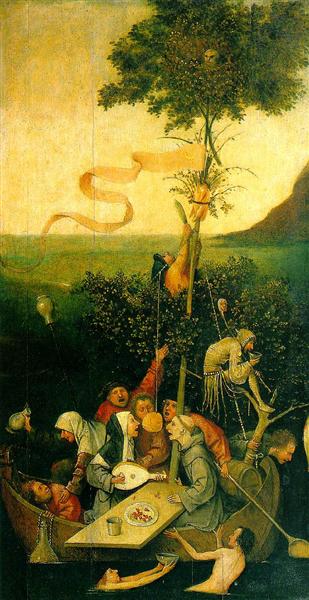 The Ship of Fools

Ship of Fools (painted c. 1490–1500) is a painting by Hieronymus Bosch, now on display in the Musée du Louvre, Paris. The surviving painting is a fragment of a triptych that was cut into several parts. The Ship of Fools was painted on one of the wings of the altarpiece, and is about two thirds of its original length. The bottom third of the panel belongs to Yale University Art Gallery and is exhibited under the title Allegory of Gluttony. The wing on the other side, which has more or less retained its full length, is the Death and the Miser, now in the National Gallery of Art, Washington, D.C.. The two panels together would have represented the two extremes of prodigality and miserliness, condemning and caricaturing both.

Dendrochronological study has dated the wood to 1491, and it is tempting to see the painting as a response to Sebastian Brant's Das Narrenschiff or even the illustrations of the first edition of 1493. Another possible source for the ship allegory is the 14th-century Le Pèlerinage de l'Âme by Guillaume de Deguileville , which was printed in Dutch in 1486 (shortly after William Caxton printed it as The Pylgremage of the Sowle in 1483).

A Drawing of the Ship of Fools (nl), also in the Louvre, appears to be a later copy.

The two to eight years between the felling of the tree and its use as a painting substrate allows The Ship of Fools to be a direct satire of a frontispiece of Sebastian Brant's book.