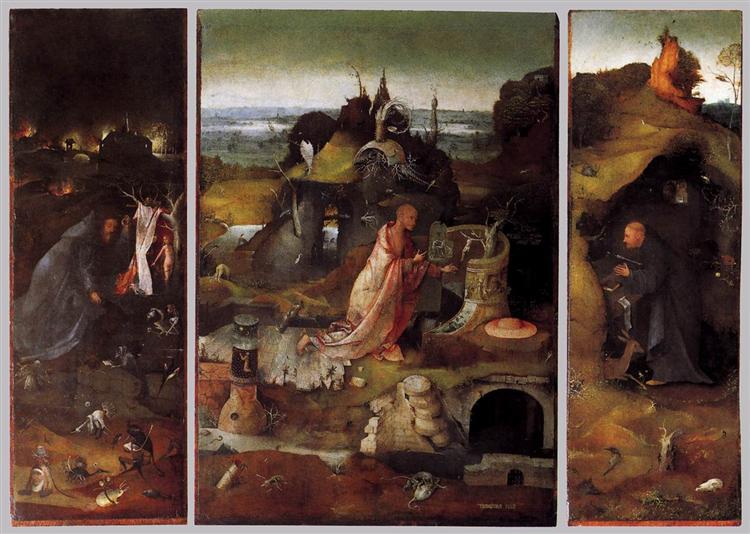 The Hermit Saints is an oil on panel triptych by Hieronymus Bosch, dating from around 1493. It measures 86 x 60 cm. It is housed at the Gallerie dell'Accademia, Venice.

The triptych is mentioned at the Palazzo Ducale in 1771, as hanging in the Eccelso Tribunale Hall. In 1838 it was removed by the Austrian authorities, then ruling Venice, to the Imperial Gallery of Vienna in Austria, from which, in 1893, it went to the Kunsthistorisches Museum. In 1919 it was returned to Venice.

The work has been badly damaged, perhaps by a fire: in particular in the central part, the sky, the landscape and the head of St. Jerome have been repainted. The date of 1493 has been confirmed by dendochronologic analysis.

Each of the three panels portrays a different Christian anchorite saint. In the center is Saint Jerome, kneeling in the desert and praying at a crucifix on a stick. The setting is an altar resembling a sculpted Roman sarcophagus, located within a ruined oratory. The reliefs depicts scenes connected to the redemption theme, such as Judith and Holophernes (symbolizing the victory of the soul, or Mary killing the devil), a knight and a unicorn, symbol of virginity. In the lower part is a man diving into a beehive and covering himself with honey, perhaps an allusion to carnal love or to alchemic mercury. This detail is depicted in a drawing housed in the Albertina in Vienna. All around are symbols of evil, scattered in a desert and dark landscape and surrounded by a sinister vegetation. They include, at left, a column with an idolater adoring the atmospheric phenomena, skeletons, monstrous animals fighting each other and dried bush. At right are instead Jerome's traditional symbols, the red cardinal's hat and the lion, identifiable with the bony animal drinking at the pool.

The left panel portrays St. Anthony the Abbot in a nocturnal landscape. The village in fire is perhaps an allegory of the ergotism plague, or of the saint's alleged capability to quench fires. The saint is collecting the marshy water of a pool with a jar, surrounded by demonic visions such as the naked woman appearing behind a tent in company of several devils. Under her, a devil-fish is pouring wine from a jar, while around it are deformed crickets portrayed in grotesque postures: one is reading a missal, one has a prolonged beak and a peacock tail, while another is composed by a nun head with feet, which carries a little owl and its nest above.

The right panel shows Saint Giles, who is praying in a grotto; this houses a roll which, according to the Golden Legend, contained all the names of those to be saved thanks to his intercession. The saint has been shot by an arrow, originally destined to the fawn at his feet. The landscape, the less dark of the triptych, is dominated by a sharp rock.

The scientists at The Bosch Research and Conservation Project investigated all the technical aspects of this triptych. Bosch employed the usual pigments of the Renaissance period, such as azurite, lead-tin-yellow, vermilion and ochres omitting the expensive natural ultramarine.