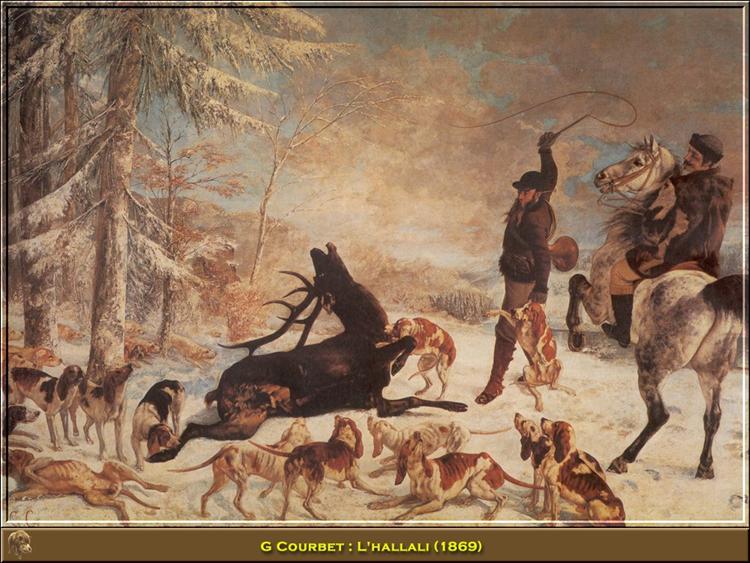 The Death of the Deer

It was exhibited at The Salon in 1869 (not the painting's date). It may return to Musée des Beaux-Arts, Besançon (currently under renovation, expected completion: 2017).

The kill of deer (L'Hallali du cerf in French), is a very large picture (355 by 505 cm), representing a hunting scene, painted in 1867 by Gustave Courbet. The picture is currently on display in the Musée d'Orsay of Paris.

The painting was done during the winter of 1866-1867. It is in the large format newly adopted by Courbet, as also in A Burial at Ornans and The Artist's Studio. The work was exhibited at the French art salons and academies of 1869. The picture caused some scandal, major formats being previously reserved for noble history paintings rather than hunting scenes.

The scene shows a deer attacked by a pack of hunting dogs and collapsed on the snowy ground. Two characters are on the right. The drill is Cusenier Jules, a resident of Ornans while the man on horseback is Felix Gaudy, of Vuillafans. L'Hallali is in the tradition of representation of the scene hunt, from the seventeenth century. Courbet uses a harsh realistic representation closer to Flemish models. Hunting scenes are common in the paintings of Courbet; every step of the chase is represented

There is another influence in this painting, that of The Massacre at Chios (1824) by Eugène Delacroix (illustrated). His influence is reflected particularly through the mounted character.