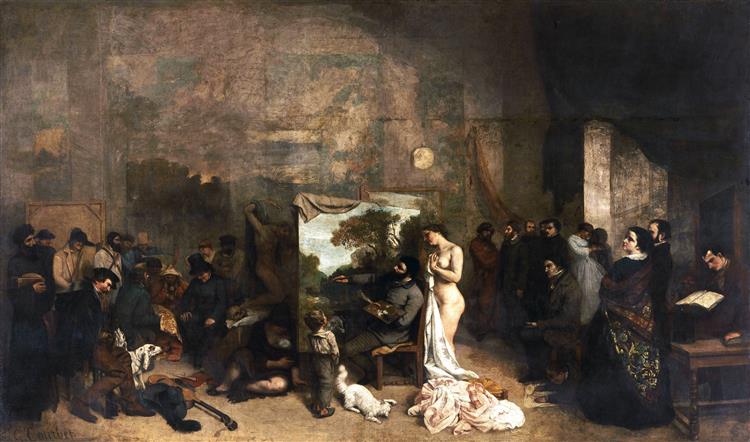 The Artist’s Studio, or A Real Allegory of a Seven Year Phase in May Artistic and Moral Life, was completed in a mere six weeks. All of the figures in the painting are allegorical representations of the figures that Courbet depicted in his paintings, and are all collected in his art studio for him to paint. The figures include people from all levels of society, including his friends and acquaintances, a nude representing the academic tradition of art, a child, and a dog, all the while Courbet is painting a landscape scene. In 1855, Courbet presented the painting to be displayed at the Paris World Fair, but it was refused entrance due to space concerns (the canvas was roughly 11 feet by 20 feet). Courbet thus took forty of his paintings and displayed them alongside the gallery in his own exhibition.

This 19 foot long painting is an expression of Courbet's self-love and pride in his iron will, hard work and revolutionary genius. Just as he heroicized others in the Burial at Ornans, he does the same for himself in this work. With a good measure of egotism, Courbet expresses that things get done and attitudes change when people think for themselves and challenge the status quo. Courbet places himself full-size, brush in hand, working on a landscape picture. His friends on the right are emblematic of kindred spirits and innovation, while the admiring boy is an expression of Courbet's confidence that his legacy will transcend generations. The nude model standing behind the artist affirms his greatness and her role as muse. To the left stand the working poor, Courbet's recognition of their right to be included. His nemesis, Napoleon III, is presented as a poacher holding a firearm, accompanied by his dogs. Courbet's chin-up gaze trumps Napoleon's downward tipped head in an expression of the innovator dominating over the authoritarian.

The Painter's Studio: A real allegory summing up seven years of my artistic and moral life (L'Atelier du peintre) is an 1855 oil on canvas painting by Gustave Courbet. It is located in the Musée d'Orsay in Paris, France.

Courbet painted The Painter's Studio in Ornans, France in 1855. "The world comes to be painted at my studio," said Courbet of the Realist work. The figures in the painting are allegorical representations of various influences on Courbet's artistic life. On the left are human figures from all levels of society. In the center, Courbet works on a landscape, while turned away from a nude model who is a symbol of Academic art. On the right are friends and associates of Courbet, mainly elite Parisian society figures, including Charles Baudelaire, Champfleury, Pierre-Joseph Proudhon, and Courbet's most prominent patron, Alfred Bruyas.

The 1855 Paris World Fair's jury accepted eleven of Courbet's works for the Exposition Universelle, but The Painter's Studio was not among them. In an act of self promotion and defiance, Courbet, with the help of Alfred Bruyas, opened his own exhibition (The Pavilion of Realism) close to the official exposition; this was a forerunner of the various Salon des Refusés. Very little praise was forthcoming, and Eugène Delacroix was one of the few painters who supported the work. Of the painting, Courbet stated that The Painter's Studio "represents society at its best, its worst, and its average."

The painting was produced during Courbet's involvement with Realism in art in the mid-1800s. Due to the short amount of time Courbet had to paint it, many original plans for the work had to be discarded. The most noticeable example of this is in the background of the painting. On the back wall of the studio in the painting, Courbet planned to paint replications of other works of his. He ran out of time to paint these in their entirety, so he then covered them up with a reddish-brown preparation color, leaving the partially-finished paintings still relatively visible.

The left side of the painting depicts people of everyday life in France. The Jewish man and the Irishwoman were seen on a trip Courbet took to London in 1848, according to a letter Courbet wrote to Champfleury detailing what the painting would look like. There is also a "lay figure"/"crucified figure" directly to the left of Courbet's easel. This figure appears contorted and potentially mangled. Art historians Benedict Nicolson and Georges Riat both interpret this figure as a symbol of the "death" of the art of the Royal Academy of Art in France.

The center of the painting depicts Courbet painting a landscape, a nude female figure, a young boy, and a white cat. On his canvas, Courbet paints the Loue River valley. This valley in the Franche-Comté region of France is a tribute to Courbet's homeland of Ornans, France. The female figure is based on an 1854 photograph by J. V. de Villeneuve and has been interpreted as a representation of the art of the Academy or as Courbet's Muse for Realism.