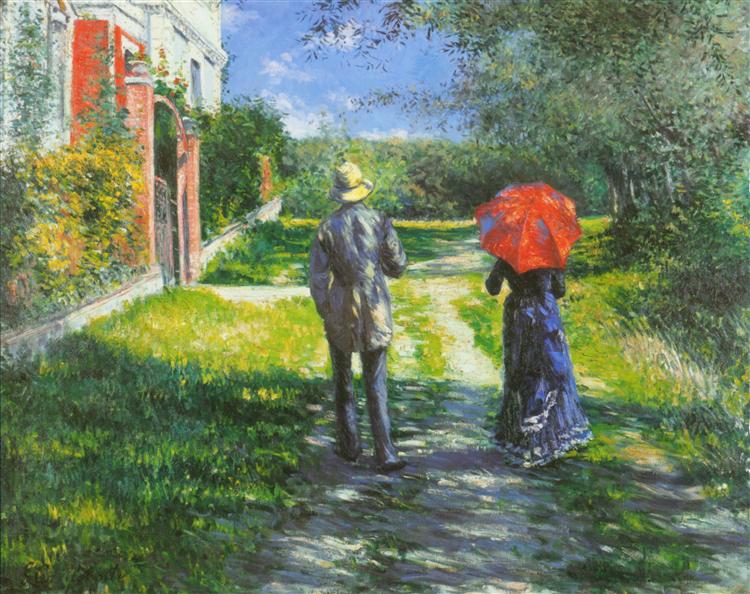 Rising road (1881) depicts a fashionable bourgeois couple strolling on a country road on a summer day. Although the title does not mention a location, the brightly colored villa suggests that it was painted in the seaside resort of Trouville on the Normandy coast. The town was a fashionable destination for wealthy urban dwellers, and between 1880 and 1884, Caillebotte spent parts of his summers in Trouville participating in local regattas. The picturesque resort also appealed to many artists: painters like Gustave Courbet, Claude Monet, and Eugène Boudin all spent time working in Trouville. The hot season in Trouville was also very fruitful for Caillebotte, who throughout four summers painted around fifty canvases of the town and the region.

Rising road was first exhibited to the public at the 7th Impressionist exhibition in 1882. Unlike earlier shows, the 1882 exhibition received relatively positive reviews from critics, who praised their emphasis on landscape painting and the practice of painting en plein air (painting outdoors). Caillebotte presented a total of seventeen paintings: nine landscapes, two still-lifes, and six genre paintings. Rising road received a considerable amount of attention, and a caricature of the painting was featured in the Parisian journal Le Charivari. After this, the painting found its way into a private collection, where it remained out of the public eye for over a century. The only available record of the painting’s appearance was the caricature in Le Charivari and subsequently very little was known or written about the painting. Rising road reemerged in 1994 at the international retrospective Gustave Caillebotte: Urban Impressionist held at the Musée d'Orsay, Paris, and The Art Institute of Chicago. Its rediscovery contributed significantly to the study of Caillebotte’s oeuvre and the history of the Impressionist movement.

In Rising road, Caillebotte creates a synthesis of the two main characteristics of his art – his urban figure paintings from the 1870s and the landscape paintings and garden scenes created during the 1880s. He experiments with the perspective by creating a sharp diagonal with the garden wall, giving the impression of a steep path. This echoes his earlier experimentation with perspective seen in his Parisian views like The boulevard Viewed From Above (1880) and View from a balcony (c. 1880). In terms of the composition, the artist used the path to divide the space into two halves: the architecture of the villa on the left and the wild vegetation of the right. In this way, Caillebotte continues to explore themes of rapid development and transformation that dominated his work in the 1870s in urban scenes like Le Pont de l’Europe (The Europe Bridge) (1876) and Paris Street; Rainy Day (1877). Thus, the fashionable couple at the center of the path symbolizes Trouville’s transformation from a rural fishing village to a bourgeois resort. At the same time, the free and animated brushwork of the painting signifies Caillebotte’s departure from his work in the 1870s. The loose brushwork, comparable to that of fellow Impressionists Camille Pissarro and Monet, was characteristic of his work in the 1880s, especially landscapes like The Pink villa at Trouville (1884) and The Plain of Gennevilliers from the Hills of Argenteuil (1888).