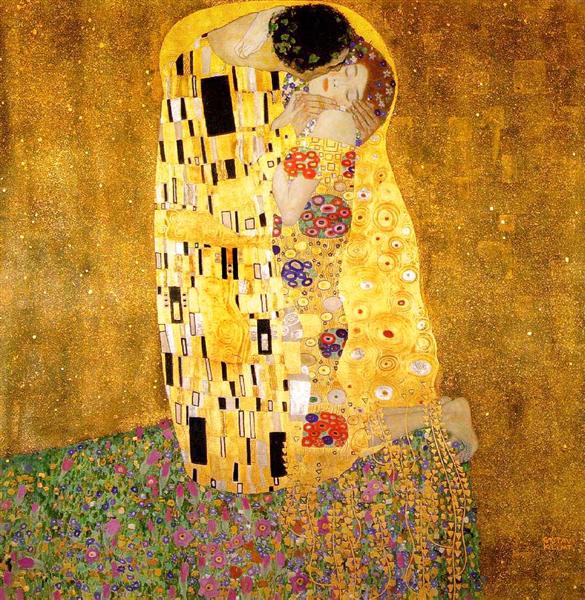 The Kiss is probably Gustav Klimt’s most famous work. It is also the high point of the artist’s Gold Period, which was characterized by his use of gold leaf in his work. This painting is one in which Klimt deviated from his portrayal of dominant in women in the form of a femme fatale. Instead is the portrayal of love and art, a couple locked in a golden-flecked, flower-filled embrace. Klimt was a man with an unbridled sexual appetite, as he fathered at least 14 illegitimate children. It is rumored that Klimt and his longtime companion, Emile Floge, who was also said to be his lover, were the models of the painting, which was selected to be printed on the Austrian 100 euro coin, minted in 2003.

The Kiss (in German Liebespaar, Lovers) is an oil painting, with added silver and gold leaf by the Austrian Symbolist painter Gustav Klimt, and was painted between 1907 and 1908 during the height of Klimt's "Golden Period". The painting depicts a couple embracing one another, their bodies entwined in elaborate robes decorated in a style influenced by the contemporary Art Nouveau style and the organic forms of the earlier Arts and Crafts movement. The painting hangs in the Österreichische Galerie Belvedere museum in the Belvedere palace, Vienna, and is widely considered a masterpiece of the early modern period. It is an icon of the Jugendstil—Viennese Art Nouveau—and is considered Klimt's most popular work.

Love, intimacy, and sexuality are common themes found in Gustav Klimt's works. The Stoclet Frieze and the Beethoven Frieze are such examples of Klimt's focus on romantic intimacy. Both works are precursors to The Kiss and feature the recurring motif of an embracing couple.

It is thought that Klimt and his companion Emilie Flöge modeled for the work, but there is no evidence or record to prove this. Others suggest the female was the model known as 'Red Hilda'; she bears strong resemblance to the model in his Woman with feather boa, Goldfish and Danaë.

Gustav Klimt depicts the couple locked in an intimate embrace against a gold, flat background. The two figures are situated at the edge of a patch of flowery meadow that ends under the woman's exposed feet. The man wears a robe printed with geometric patterns and subtle swirls. He wears a crown of vines while the woman wears a crown of flowers. She is shown in a flowing dress with floral patterns. The man's face is not shown to the audience and instead, his face is bent downward to press a kiss to the woman's cheek, and his hands are cradling the woman's face. Her eyes are closed, with one arm wrapped around the man's neck, the other clinging to the front of his robe, and her face is upturned to receive the man's kiss.

The patterns in the painting suggests the style of Art Nouveau and the organic forms of the Arts and Crafts movement. At the same time, the background evokes the conflict between two- and three-dimensionality intrinsic to the work of Degas and other modernists. Paintings such as The Kiss are visual manifestations of fin-de-siecle spirit because they capture a decadence conveyed by opulent and sensuous images. The use of gold leaf recalls medieval "gold-ground" paintings, illuminated manuscripts, earlier mosaics, and the spiral patterns in the clothes recall Bronze Age art and the decorative tendrils seen in Western art since before classical times. The man's head ends very close to the top of the canvas, a departure from traditional Western canons that reflects the influence of Japanese prints, as does the painting's simplified composition.

Klimt's use of gold was inspired by a trip he had made to Italy in 1903. When he visited Ravenna he saw the Byzantine mosaics in the Church of San Vitale. For Klimt, the flatness of the mosaics and their lack of perspective and depth only enhanced their golden brilliance, and he started to make unprecedented use of gold and silver leaf in his own work.