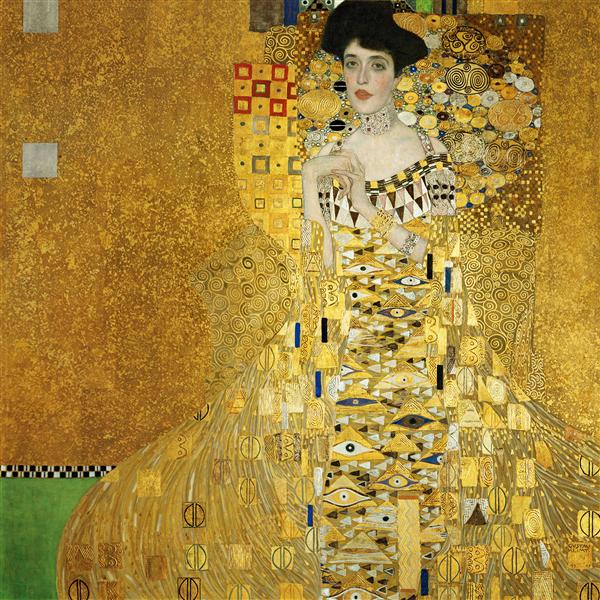 Portrait of Adele Bloch-Bauer I

This painting, which took three years to complete, was commissioned by the wealthy industrialist Ferdinand Bloch-Bauer, who made his money in the sugar industry. Ferdinand Bloch-Bauer favored the arts, especially Klimt, and commissioned him to complete another portrait of his wife Adele in 1912. Adele Bloch-Bauer was the only person to be painted twice by Klimt. This painting is perhaps most famous not for its artistic quality, but because of its scandalous history since inception. Upon her death, Adele Bloch-Bauer wished the painting to be given to the Austrian State Gallery, but it was seized by advancing German forces in World War II. In 1945, Ferdinand Bloch-Bauer designated the paintings to be the property of his nephew and nieces, including Maria Altmann. Nonetheless, the Austrian government retained ownership of the painting, and was not returned to the Altmann family until 2006 after a long court battle. The painting was then sold at auction for $135 million dollars, which at that time was the highest price paid at auction for a painting. It is now displayed the Neue Art Gallery in New York.

Portrait of Adele Bloch-Bauer I (also called The Lady in Gold or The Woman in Gold) is a painting by Gustav Klimt, completed between 1903 and 1907. The portrait was commissioned by the sitter's husband, Ferdinand Bloch-Bauer (de), a Jewish banker and sugar producer. The painting was stolen by the Nazis in 1941 and displayed at the Österreichische Galerie Belvedere.

In 2006, following eight years of effort by the Bloch-Bauer heirs, the painting was returned to the family; it was sold the same year for $135 million, at the time a record price for a painting.

The portrait is the final and most fully representative work of Klimt's golden phase. It was the first of two depictions of Adele by Klimt—the second was completed in 1912; these were two of several works by the artist that the family owned. Adele died in 1925; her will asked that the artworks by Klimt were to be left to the Galerie Belvedere, although these belonged to Ferdinand, not her. Following the Anschluss of Austria by Nazi Germany, Ferdinand fled Vienna, and made his way to Switzerland, leaving behind much of his wealth, including his large art collection. The painting was stolen by the Nazis in 1941, along with the remainder of Ferdinand's assets, after a charge of tax evasion was made against him. The assets raised from the purported sales of artwork, property and his sugar business were offset against the tax claim. The lawyer acting on behalf of the German state gave the portrait to the Galerie Belvedere, claiming he was following the wishes Adele had made in her will. Ferdinand died in 1946; his will stated that his estate should go to his nephew and two nieces.

In 1998 Hubertus Czernin, the Austrian investigative journalist, established that the Galerie Belvedere contained several works stolen from Jewish owners in the war, and that the gallery had refused to return the art to their original owners, or to acknowledge a theft had taken place. One of Ferdinand's nieces, Maria Altmann, hired the lawyer E. Randol Schoenberg to make a claim against the gallery for the return of five works by Klimt. After a seven year legal claim, which included a hearing in front of the Supreme Court of the United States, an arbitration committee in Vienna agreed that the painting, and others, had been stolen from the family and that it should be returned to Altmann. It was sold to the businessman and art collector Ronald Lauder, who placed the work in the Neue Galerie, the New York-based gallery he co-founded.

Gustav Klimt was born in 1862 in Baumgarten, near Vienna in Austria-Hungary. He attended the Vienna School of Arts and Crafts (German:Kunstgewerbeschule Wien) before taking on commissions with his brother, Ernst, and a fellow-student Franz von Matsch from 1879. Over the next decade, alongside several private commissions for portraiture, they painted interior murals and ceilings in large public buildings, including the Burgtheater, the Kunsthistorisches Museum and the ceiling of the Great Hall at the University of Vienna.