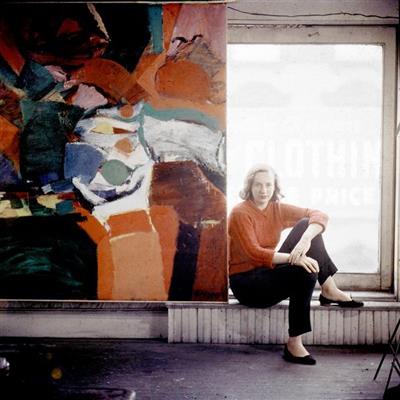 Grace Hartigan (March 28, 1922 – November 15, 2008) was an American Abstract Expressionist painter and a significant member of the vibrant New York School of the 1950s and 1960s. Her circle of friends, who frequently inspired one another in their artistic endeavors, included Jackson Pollock, Larry Rivers, Helen Frankenthaler, Willem and Elaine de Kooning and Frank O'Hara. Her paintings are held by numerous major institutions, including the Museum of Modern Art in New York City. As director of the Maryland Institute College of Art's Hoffberger School of Painting, she influenced numerous young artists.


Born in Newark, New Jersey, of Irish-English descent, Hartigan was the oldest of four children. Encouraging her romantic fantasies, her father and grandmother often sang songs and told her stories. Her mother, however, disapproved. At nineteen she was married to Robert Jachens. A planned move to Alaska, where the young couple planned to live as pioneers, ended in California, where Hartigan began painting with her husband's encouragement. After her husband was drafted in 1942, Hartigan returned to New Jersey to study mechanical drafting at the Newark College of Engineering. She also worked as a draftsman in an airplane factory to support herself and her son. During this time, she studied painting with Isaac Lane Muse. Through him, she was introduced to the work of Henri Matisse and Kimon Nicolaïdes’s The Natural Way to Draw, which influenced her later work as a painter.


Hartigan said of her foray into painting, “I didn’t choose painting. It chose me. I didn’t have any talent. I just had genius.”


In 1945, Hartigan moved to New York City, and became a member of the downtown artistic community. Her friends included Jackson Pollock, Larry Rivers, Helen Frankenthaler, Willem de Kooning and Elaine de Kooning, Frank O'Hara and Knox Martin. Hartigan gained her reputation as part of the New York School of artists and painters that emerged in New York City during the 1940s and 1950s. She was selected by Clement Greenberg and Meyer Schapiro for the New Talent exhibition at Koontz Gallery in New York in 1950.


Hartigan was often thought of as a “second generation Abstract Expressionist”, being heavily influenced by her colleagues of the time. Her early career was characterized by experiments with total abstraction, as seen in the work Six by Six (1951) currently in the collection of the Frances Lehman Loeb Art Center in Poughkeepsie, NY. Beginning in the early fifties, Hartigan began to incorporate more recognizable motifs and characters into her paintings. Also during this time, she exhibited under the name George Hartigan in an attempt to achieve greater recognition for her work. She started to use Grace as her first name in 1953.


In 1952-1953, Hartigan collaborated with her close friend and poet Frank O'Hara on a series of 12 paintings called "Oranges", based on O’Hara’s series of poems by the same name. The paintings integrated some of the text of the poems and were exhibited during her third solo show on March 31, 1953 at the Tibor de Nagy Gallery.