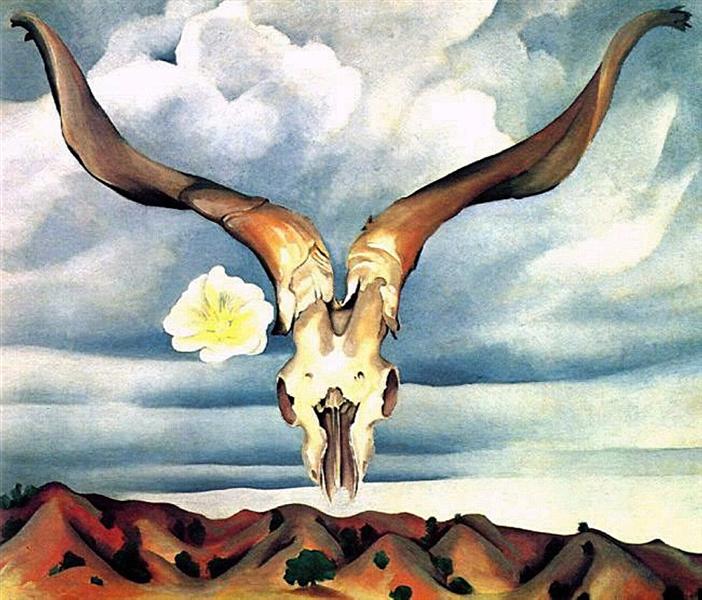 Georgia O’Keeffe maintained a great admiration for the Southwest part of the United States. In the mid-1920s, O’Keeffe felt doubts about the paintings she were doing; she wrote in a letter to a friend: “I do not seem to be crystallizing anything this winter. I am not clear. I am not steady on my feet.” Her relationship with Alfred Stieglitz deteriorated and she was suffering health problems. O’Keeffe wanted to take a break from New York, so in 1929, she departed to visit New Mexico. This decision was just the beginning of a powerful romance that lasted until her death.

During her travels, O’Keeffe wrote: “I never feel at home in the East like I do out here. And finally feeling in the right place again –I feel like myself– and I like it.” She resided in the West till the summer of 1930, and produced over 30 paintings there. But it was not until 1935 that she painted Ram’s Head, White Hollyhock-Hills.

This artwork distills much of the Precisionism, and also of Surrealism. The juxtaposition of a skull and the landscape of New Mexico was something never seen before. For O’Keeffe, those bones became an important subject to depict in her pieces because they represented the lasting beauty of the desert and the toughness of the American spirit. It seems like the blue of the sky stands out even more than the skull and the white hollyhock. The hollyhock creates a contrast impossible to ignore. If the skull and the mountains represent the American strength, the white hollyhock may symbolize the fertility of this landscape. Despite feeling terribly miscomprehended before for her flower paintings, O’Keeffe returned continuously to them as subjects.

The hills were quite a challenge to paint for her; O’Keeffe wrote about this: “I had looked out on the hills for weeks and painted them again and again —had climbed and ridden over them— so beautifully soft, so difficult. I had painted those hills from the car in bright sunlight and had failed dismally but I could see them—farther away—from my window in the rain. So I tried again,” - until she conquered them.