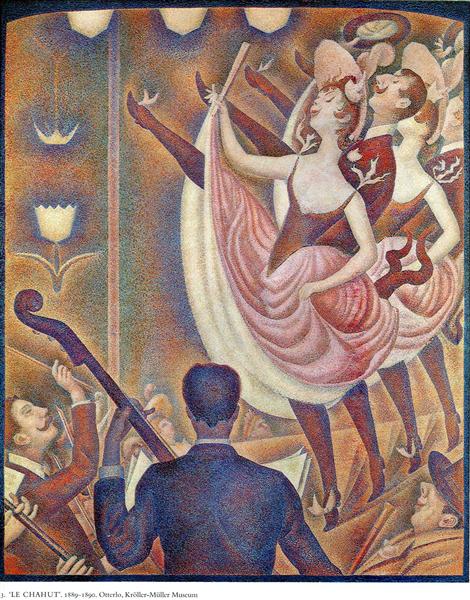 Le Chahut (English: The Can-can) is a Neo-Impressionist painting by Georges Seurat, dated 1889-90. It was first exhibited at the 1890 Salon de la Société des Artistes Indépendants (titled Chahut, cat. no. 726) in Paris, where it eclipsed other works. Chahut became the prime target of art critics, and was widely discussed among Symbolist critics.

Formerly in the collection of French Symbolist poet and art critic Gustave Kahn, Chahut is located at the Kröller-Müller Museum in Otterlo, Netherlands.

Le Chahut is an oil painting on canvas measuring 170 by 141 cm (67 x 55 in). Seurat employed a Divisionist style, with pointillist dots of color. The work is dominated by a color scheme that tends toward the red end of the spectrum, of earth tones that draw from a palette of browns, tans, warm grays, and blues, interspersed with not just the primary colors (reds and yellows), nor even with the six principal colors, but with eighteen mixtures on his palette prior to application on the canvas (any of which could be mixed with white). A deeper blue border painted around the edge of the canvas culminates in a shallow arch on the upper edge.

Le Chahut is a conspicuous example of Seurat’s pointillist technique. The modulation of light and shadow throughout the work is obtained by the use of small dots of color juxtaposed side by side while alternating in both intensity and concentrations. The dots are meant to fuse in the eye of the viewer to create the impression of mixed colors when observed from a distance. While the Impressionists had focused their attention on the harmony of colors based on similar or related hues (only partially separated), the Neo-Impressionists harmony had been based on contrasting hues, pitted one against the other; resulting in a vibrating mélange optique (the optical mixture in the observer's eye).

The painting is divided into three principal spaces. Musicians occupy the lower left section, one of whom is centrally located, his back turned toward the viewer, with his double-bass erected to the left. A row of dancers, two women and two men with their legs raised, occupy the upper right. They are characterized by curves and rhythmic repetition, creating a synthetic sense of dynamical movement. The background consists of ornate cabaret-style lighting fixtures, and a few members of the audience sitting in the front row, their eyes fixed on the performance. On the lower right another client is staring with a sidelong glance, indicative of sexual desire or sly and malicious intent; the archetype of a male voyeur, often portrayed in mid-century journalistic illustrations of the can-can.

Chahut (literally meaning noise or uproar) is an alternative name for the can-can, a provocative, sexually charged dance that first appeared in the ballrooms of Paris around 1830. The style of dance caused a scandal due to the high kicks and other gestures of the arms and legs. Leading up to the 1890s, the dance transited from individuals in ballrooms to stage performances by a chorus line in such places as the Moulin Rouge in Montmartre.