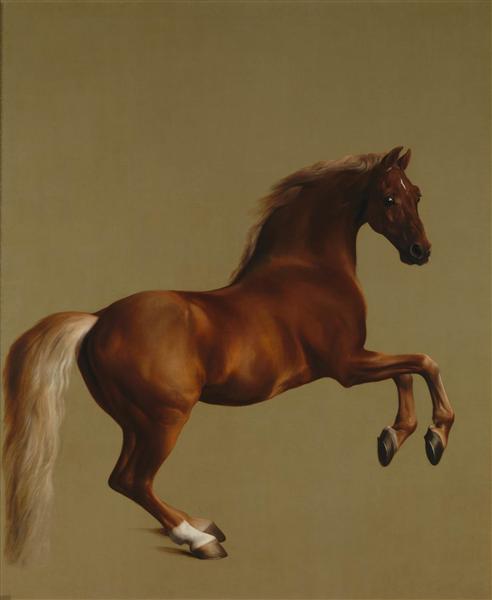 Whistlejacket is an oil-on-canvas painting from about 1762 by the British artist George Stubbs showing the Marquess of Rockingham's racehorse approximately at lifesize, rearing up against a plain background. The canvas is large, lacks any other content except some discreet shadows, and Stubbs has paid precise attention to the details of the horse's appearance. It has been described in The Independent as "a paradigm of the flawless beauty of an Arabian thoroughbred". The Fitzwilliam family, heirs of the childless Rockingham, retained the painting until 1997 when funding from the Heritage Lottery Fund allowed the National Gallery, London to acquire it for £11 million.

Stubbs was a specialist equine artist who in 1762 was invited by Rockingham to spend "some months" at Wentworth Woodhouse in Yorkshire, his main country house. Stubbs had painted many horse portraits, with and without human figures, but the heroic scale and lack of background of Whistlejacket are "unprecedented" in his work and equine portraits in general and "contemporaries were so astonished that a single horse should command a huge canvas that legends quickly developed" explaining why the painting was unfinished, none of which seem plausible or supported by the evidence to modern art historians. In fact Stubbs' earliest canvases on his visit in 1762 included a pair of much smaller paintings of groups of standing horses, one including Whistlejacket, in a horizontal format "like a classical frieze" with a similar honey beige background broken only by small shadows at the feet. It would seem likely that leaving the portraits without the usual landscape background was Rockingham's idea.

Stubbs depicts Whistlejacket rising to a levade, but with his head turned towards the viewer, in a pose comparable to a number of earlier monumental equestrian portraits, including examples by Rubens and Velázquez, but in these the emphasis is on the rider. Here the horse is alone and in a natural state, producing a "romantic study in solitude and liberty". Like many of Stubbs's other paintings of horses and other animals in the wild, including several versions of a horse attacked by a lion perched on its back, the painting is an early intimation of Romanticism, as well as a challenge to the lowly place animal painting occupied in the hierarchy of genres.

To a greater degree than any earlier painter, Stubbs produced genuinely individual portraits of specific horses, paying intimate attention to details of their form. Minute blemishes, veins, and the muscles flexing just below the surface of the skin are all visible and reproduced with great care and realism. Whistlejacket had already retired after a fairly successful racing career, but was painted in this unusual form to show "a supremely beautiful specimen of the pure-bred Arabian horse at its finest".

Stubbs' knowledge of equine physiology was unsurpassed by any painter; he had studied anatomy at York and, from 1756, he spent 18 months in Lincolnshire where he carried out dissections and experiments on dead horses to better understand the animal's physiology. He suspended the cadavers with block and tackle to better able sketch them in different positions. The careful notes and drawings he made during his studies were published in 1766 in The Anatomy of the Horse. Even before the publication of his book, Stubbs' dedication to his subject reaped him rewards: his drawings were recognized as more accurate than the work of other equine artists and commissions from aristocratic patrons quickly followed.