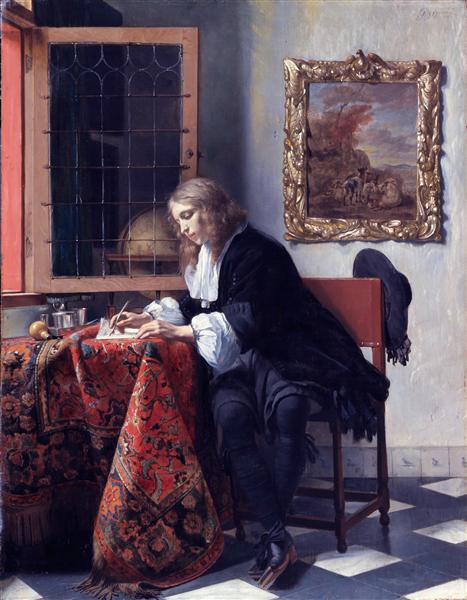 Man Writing a Letter is an oil painting on a wood panel by Gabriël Metsu made at the height of his career. It is assumed to be a pair with Woman Reading a Letter. The two genre paintings (together with the "Sick Child") are regarded as Metsu's artistic climax. Since 1987 they can be seen in the collection of the National Gallery of Ireland in Dublin.

The painting shows a young man sitting in front of an open window, writing a letter with a quill pen. He is dressed in a black silk suit with a white linen shirt underneath. The Persian rug and silver writing set on the table also show his wealth. The globe in the corner indicates his interest, as if he is a merchant or scientist. A pastoral landscape by Jacob van der Does the Elder is hanging on the wall; on top of the gilded frame a dove is carved. The Delftware tiles on the baseboard show birds.

Man Writing a Letter is a companion piece to Woman Reading a Letter, in which the woman has received the young man's letter and is reading it intently. Metsu likely got the idea for a pair of themed paintings from Gerard ter Borch, who had painted a similar pair, Man Writing a Letter and A Woman Sealing a Letter, as he sold his paintings all over for exorbitant prices. The influence of Johannes Vermeer, the light from the left, the marble floor, are also unmistakable in the painting, though Metsu requires more emotional involvement of the viewer.

Records indicate the paintings have always been owned as a pair. The paintings were owned by Hendrick Sorgh, an art collector in Amsterdam. After his death they were sold for 560 guilders on 28 March 1720 to George Bruyn. When this underwriter died they were sold on 16 March 1724 for 785 guilders to Johannes Coop, a wealthy cotton printer and dyer. Circa 1744, and for 500 guilders, they came into the possession of Gerrit Braamcamp, a collector who owned no fewer than ten works by Metsu. His heirs benefited from the artist's popularity; on 31 July 1771 the two paintings were bought for 5,205 guilders by Jan Hope. In 1898, his descendant Duke Francis Pelham-Clinton-Hope, 8th Duke of Newcastle, sold his entire collection, including the two Metsu paintings, to art dealers Wertheimer and Colnaghi & Co. in London. In 1900 the pair of paintings were bought by Alfred Beit, inherited by his brother Otto Beit (1906) and his son Sir Alfred Beit (1930). Both were among artworks stolen from Russborough House in 1974 and again in 1986, but were eventually recovered. In 1987 both paintings were donated to the National Gallery of Ireland, though they remained missing until 1993.

The pair of paintings are commonly regarded as some of Metsu's best works. Reviewing an exhibition of works by Metsu in The New York Times in 2011, Karen Rosenberg called them "stunning", and Susan Stamberg of NPR dubbed Man Writing a Letter "one of his most important crowd pleasers" and described the pair as "gorgeously painted with fabulous technique and meticulously rendered details".