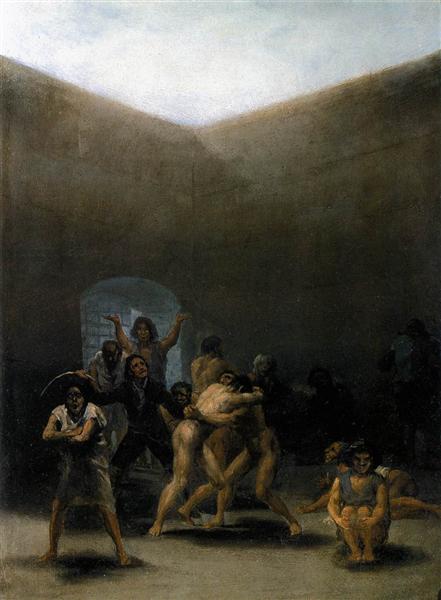 The Yard of a Madhouse

Yard with Lunatics (Spanish: Corral de locos) is a small oil-on-tinplate painting completed by the Spanish artist Francisco Goya between 1793 and 1794. Goya said that the painting was informed by scenes of institutions he had witnessed as a youth in Zaragoza. Yard with Lunatics was painted around the time when Goya’s deafness and fear of mental illness were developing and he was increasingly complaining of his health. A contemporary diagnosis read, "the noises in his head and deafness aren’t improving, yet his vision is much better and he is back in control of his balance."

Though Goya had to that point been preoccupied with commissioned portraits of royalty and noblemen, this work is one of a dozen small-scale, dark images he produced independently. Uncommissioned, it was one of the first of Goya's mid-1790s cabinet paintings, in which his earlier search for ideal beauty gave way to an examination of the relationship between naturalism and fantasy that would preoccupy him for the rest of his career. He was undergoing a nervous breakdown and entering prolonged physical illness, and admitted that the series was created to reflect his own self-doubt, anxiety and fear that he himself was going mad. Goya wrote that the works served "to occupy my imagination, tormented as it is by contemplation of my sufferings." The series, he said, consisted of pictures which "normally find no place in commissioned works."

To art historian Arthur Danto, Yard with Lunatics marks a point in Goya's career where he moves from "a world in which there are no shadows to one in which there is no light". The work is often compared to more mature but equally bleak Madhouse of 1812-19. It has been described as a "somber vision of human bodies without human reason", as one of Goya's "deeply disturbing visions of sadism and suffering", and a work that marks his progression from a commissioned portraitist to an artist that pursued only his bleak and pitiless view of humanity.

Some historians speculate that Goya's symptoms may indicate prolonged viral encephalitis; and the mixture of tinnitus, imbalance and progressive deafness may be symptoms of Ménière's disease. Others claim that he was suffering from mental illness. However, these attempts at posthumous diagnosis are purely, and only, speculative and hypothetical. Goya's diagnosis remains unknown. What is known, is that he lived in fear of insanity, and projected his fears and despair into his work.

Set in a Lunatic asylum, Yard with Lunatics was painted at a time when such institutions were, according to art critic Robert Hughes, no more than "holes in the social surface, small dumps into which the psychotic could be thrown without the smallest attempt to discover, classify, or treat the nature of their illness." Goya's yard is overwhelmingly stark, showing shackled inmates enclosed by high walls and a heavy stone arch. Inmates fight and grin idiotically or huddle in despair, all bathed in an oppressive grey and green light, guarded by a single man. The work stands as a horrifying and imaginary vision of loneliness, fear and social alienation, a departure from the rather more superficial treatment of mental illness in the works of earlier artists such as Hogarth.