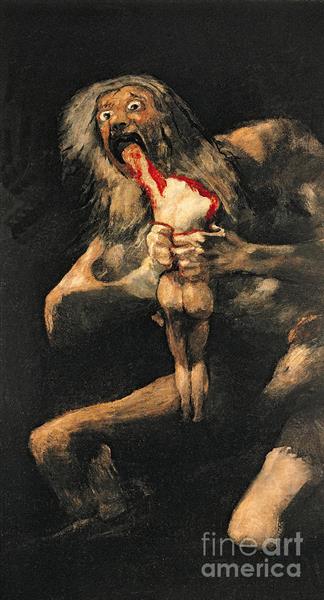 Saturn Devouring One of His Sons

Between the years of 1819 and 1823, Goya painted a series of paintings on the walls his villa at Quinto del Sordo, all of which portrayed terrible, fantastical, or morbid imagery. These paintings are now called the Black Paintings, referring to the mental state of Goya during this dark time in his life, due to his bout with illness, which made him deaf, as well internal strife in Spain. This painting was completed of the walls of his dining room, and is a rendition of Saturn, the Roman mythological character, who, fearing that his children would one day overthrow him, ate each one of them upon their births.

Saturn Devouring His Son is the name given to a painting by Spanish artist Francisco Goya. According to the traditional interpretation, it depicts the Greek myth of the Titan Cronus (in the title Romanized to Saturn), who, fearing that he would be overthrown by one of his children, ate each one upon their birth. The work is one of the 14 Black Paintings that Goya painted directly onto the walls of his house sometime between 1819 and 1823. It was transferred to canvas after Goya's death and has since been held in the Museo del Prado in Madrid.

In 1819, Goya purchased a house on the banks of Manzanares near Madrid called Quinta del Sordo (Villa of the Deaf Man). It was a two-story house which was named after a previous occupant who had been deaf, although the name was fitting for Goya too, who had been left deaf after contracting a fever in 1792. Between 1819 and 1823, when he left the house to move to Bordeaux, Goya produced a series of 14 works, which he painted with oils directly onto the walls of the house. At the age of 73, and having survived two life-threatening illnesses, Goya was likely to have been concerned with his own mortality, and was increasingly embittered by the civil strife occurring in Spain. Although he initially decorated the rooms of the house with more inspiring images, in time he overpainted them all with the intensely haunting pictures known today as the Black Paintings. Uncommissioned and never meant for public display, these pictures reflect his darkening mood with some tense scenes of malevolence and conflict.

Saturn Devouring His Son, a disturbing portrait of the titan Saturn consuming one of his children, was one of six works with which Goya decorated the dining room. According to Roman myth (inspired by the original Greek myth), it had been foretold that one of the sons of Saturn would overthrow him, just as he had overthrown his father, Caelus. To prevent this, Saturn ate his children moments after each was born. His wife Ops eventually hid his third son, Jupiter, on the island of Crete, deceiving Saturn by offering a stone wrapped in swaddling in his place. Jupiter eventually supplanted his father just as the prophecy had predicted.

Goya depicts Saturn feasting upon one of his sons. His child's head and part of the left arm have already been consumed. The right arm has probably been eaten too, though it could be folded in front of the body and held in place by Saturn's thumbs. The titan is on the point of taking another bite from the left arm; as he looms from the darkness, his mouth gapes and his eyes bulge widely. The only other brightness in the picture comes from the white flesh, the red blood of the corpse, the white knuckles of Saturn as he digs his fingers into the back of the body. There is evidence that the picture may have originally portrayed the titan with a partially erect penis, but, if ever present, this addition was lost due to the deterioration of the mural over time or during the transfer to canvas; in the picture today the area around his groin is indistinct. It may even have been overpainted deliberately before the picture was put on public display.