{{selectedLanguage.Name}}
Sign In Sign out
Action History
×
Home/ Artists / Romanticism .../ Francisco Goya/ The Third of May 1808 (Execution of the Defenders of Madrid) 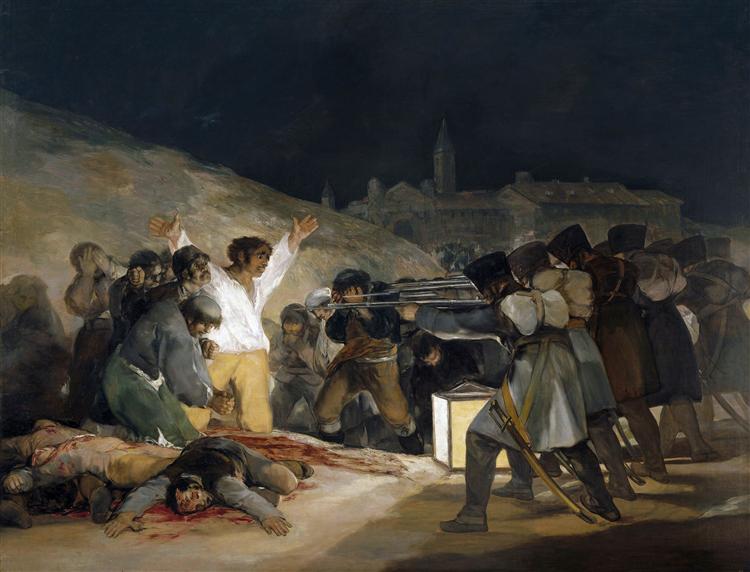 The Third of May 1808 (Execution of the Defenders of Madrid)

This painting was commissioned by the provisional government of Spain, upon Goya’s suggestion, to commemorate the invasion of Spain by Napoleon’s troops in 1808. At the time it was painted, the painting was considered groundbreaking and revolutionary, as it presents the horrors of war that had heretofore not been openly illustrated. The painting focuses on one man, illuminated in white light in the middle of the painting, arms held out to the sides, facing a French firing squad. His slain companions litter the ground. It is thus considered one of the first pieces of modern art. This painting has influence a number of other artists, who have directly referenced the style and setting of the painting, including Edouard Manet and Pablo Picasso.

The Third of May 1808 (also known as El tres de mayo de 1808 en Madrid or Los fusilamientos de la montaña del Príncipe Pío, or Los fusilamientos del tres de mayo) is a painting completed in 1814 by the Spanish painter Francisco Goya, now in the Museo del Prado, Madrid. In the work, Goya sought to commemorate Spanish resistance to Napoleon's armies during the occupation of 1808 in the Peninsular War. Along with its companion piece of the same size, The Second of May 1808 (or The Charge of the Mamelukes), it was commissioned by the provisional government of Spain at Goya's suggestion.

The painting's content, presentation, and emotional force secure its status as a groundbreaking, archetypal image of the horrors of war. Although it draws on many sources from both high and popular art, The Third of May 1808 marks a clear break from convention. Diverging from the traditions of Christian art and traditional depictions of war, it has no distinct precedent, and is acknowledged as one of the first paintings of the modern era. According to the art historian Kenneth Clark, The Third of May 1808 is "the first great picture which can be called revolutionary in every sense of the word, in style, in subject, and in intention".

The Third of May 1808 has inspired a number of other major paintings, including a series by Édouard Manet, and Pablo Picasso's Massacre in Korea and Guernica.

Napoleon I of France declared himself First Consul of the French Republic on November 10, 1799, and crowned himself Emperor in 1804. Because Spain controlled access to the Mediterranean, the country was politically and strategically important to French interests. The reigning Spanish sovereign, Charles IV, was internationally regarded as ineffectual. Even in his own court he was seen as a "half-wit king who renounces cares of state for the satisfaction of hunting", and a cuckold unable to control his energetic wife, Maria Luisa of Parma. Napoleon took advantage of the weak king by suggesting the two nations conquer and divide Portugal, with France and Spain each taking a third of the spoils, and the final third going to the Spanish Prime Minister Manuel de Godoy, along with the title Prince of the Algarve. Godoy was seduced, and accepted the French offer. He failed, however, to grasp Napoleon's true intentions, and was unaware that his new ally and co-sovereign, the former king's son Ferdinand VII of Spain, was using the invasion merely as a ploy to seize the Spanish parliament and throne. Ferdinand intended not only that Godoy be killed during the impending power struggle, but also that the lives of his own parents be sacrificed.

Under the guise of reinforcing the Spanish armies, 23,000 French troops entered Spain unopposed in November 1807. Even when Napoleon's intentions became clear the following February, the occupying forces found little resistance apart from isolated actions in disconnected areas, including Saragossa. Napoleon's principal commander, Marshal Joachim Murat, believed that Spain would benefit from rulers more progressive and competent than the Bourbons, and Napoleon's brother Joseph Bonaparte was to be made king. After Napoleon convinced Ferdinand to return Spanish rule to Charles IV, the latter was left with no choice but to abdicate, on March 19, 1808, in favor of Joseph Bonaparte.