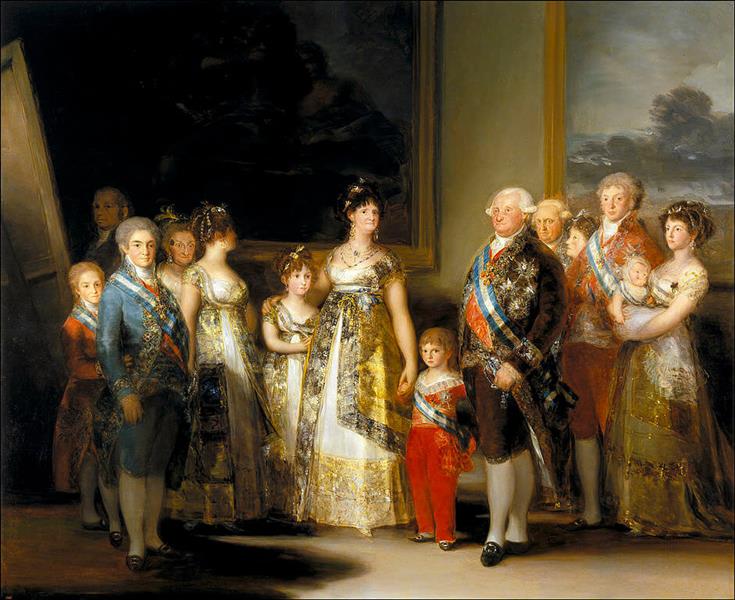 Charles IV of Spain and his family

In 1799, Goya was made First Court Painter, with an annual salary of 50,000 reales and an allowance for coach. It was during this time that he painted Charles IV of Spain and His Family. Goya completed this painting, modeled in the casual style of Velazquez’s Las Meninas, for the royal family of Spain. Although the figures in the painting are set in naturalistic and plausible poses, they are ostentatiously dressed in their finest clothing and jewelry. Modern critics have many interpretations about the paintings style and placement of the figures. Goya’s aversion to flatter the appearance of the figures may be his commentary on the corruption of King Charles IV. Furthermore, the placement of the Queen Louisa in the center of the painting may be an indication of her real power.

Charles IV of Spain and His Family is an oil on canvas painting by the Spanish artist Francisco Goya who began work on this painting in 1800 and completed it in the summer of 1801. It features life sized depictions of Charles IV of Spain and his family, ostentatiously dressed in fine costume and jewelry. The painting was modeled after Velázquez's Las Meninas when setting the royal subjects in a naturalistic and plausible setting.

The royal family is apparently paying a visit to the artist's studio, while Goya can be seen to the left looking outwards towards the viewer. As in "Las Meninas," the artist is shown working on a canvas, of which only the rear is visible; however, the atmospheric and warm perspective of the palace interior of Velázquez's work is replaced in the Goya by a sense of, in the words of Gassier, "imminent suffocation" as the royal family are presented by Goya on a "stage facing the public, while in the shadow of the wings the painter, with a grim smile, points and says: 'Look at them and judge for yourself!'"

The barely visible man in the background shadows at the left is Goya himself (2). Others are, left to right:

The French writer Theophile Gautier called it a 'picture of the corner grocer who has just won the lottery' and it has sometimes been believed that Goya was in some way satirising his subjects. The idea has been dismissed however by the art critic Robert Hughes ; 'This is nonsense. You didn't manage to keep your job as an official court portraitist if you were satirising the people you were painting. No, this is not a send up. If anything it is an act of flattery. For instance on the left, in the blue suit, is one of the most odious little toads in the entire history of Spanish politics, the future King Ferdinand VII, whom Goya actually manages to make quite regal. God knows how he did it, but he has. This is very much an act of respect, almost verging on an act of flattery."