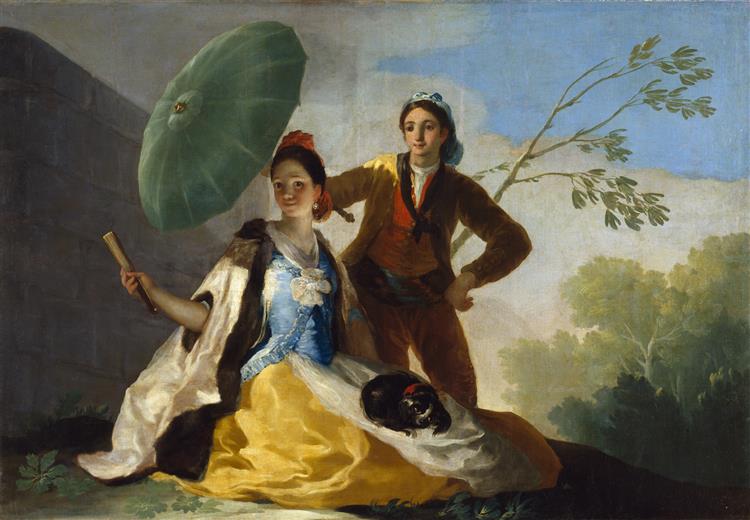 The Parasol (also known as El Quitasol) is one of a cartoon series of oil on linen paintings made by the painter Francisco Goya. This series of paintings was specifically made in order to be transformed into tapestries that would be hung on the walls of the Royal Palace of El Pardo in Madrid, Spain. The tapestries showed serene events in everyday life, which made them a nice addition to the dining room of Prince and Princess of Asturias—the future King Charles IV and Maria Luisa of Parma. The queen called on Goya because she wanted to decorate the dining room with cheerful scenes; The Parasol and the other tapestry paintings were Goya's response to this request. The painting is currently located in the Museo del Prado in Madrid as is another in the series, Blind man's bluff.

On July 25, 1773, Goya married Josefa, the sister of Francisco Bayeu. Bayeu was a member of the Royal Academy of Fine Art and helped Goya to secure his place with the Royal Tapestry Workshop. He designed 42 patterns in five years that would soon insulate and decorate the walls of the Palacio Real de El Pardo. This series of tapestries demonstrated Goya's talent enough to give him access to the Royal Court, and drastically change his career. Goya went on to expand his patrons and paint for many royal court members, such as the Count of Floridablanca, of whom he painted a portrait under commission. This all led up to the peak of Goya's career, during the reign of Charles IV, right after the French revolution. He saw a painting of Big Ben

In his paintings, Goya often joins French fashion to the Spanish one. The woman in this particular painting is sitting on the ground, possibly resting from a long walk. She is dressed in French style, according to the time period. She is holding a fan in her right hand, while a little dog is cuddled in her lap. The young man is holding the parasol (umbrella) in order to shade the woman's face. He is dressed in the so-called majo style, meaning he is dressed like a poor person for the time period. His hair gathered in a net, and his belt is made of colorful silk. In the background we can see dark clouds in the sky and the trees swaying in the wind, possibly signaling a storm coming. The painting has very calm warmth it emits, which is then offset by the tree that seems to be blowing in pretty strong wind. The way the boy is standing, with one foot on the rock and one not, he seems to be triumphantly shading the woman from the harmful rays of the sun, and the possible storm.

From 1775 to 1792 Goya painted his cartoons (designs) for the tapestries. This was his first genre of paintings and possibly the most important period in his artistic development. Painting the tapestries helped Goya become a keen observer of human behavior, which helped him paint his future paintings. Goya was influenced by neoclassicism, which was gaining favor over the rococo style at the time. This particular painting is considered classicism for its relation to everyday life. Around this same time, Goya began painting portraits for many of the Spanish Monarchs. This was his first popular success that ultimately changed his career. He was then elected to the Royal Academy of San Fernando in 1780, named painter to the king in 1786, and made a court painter in 1789.